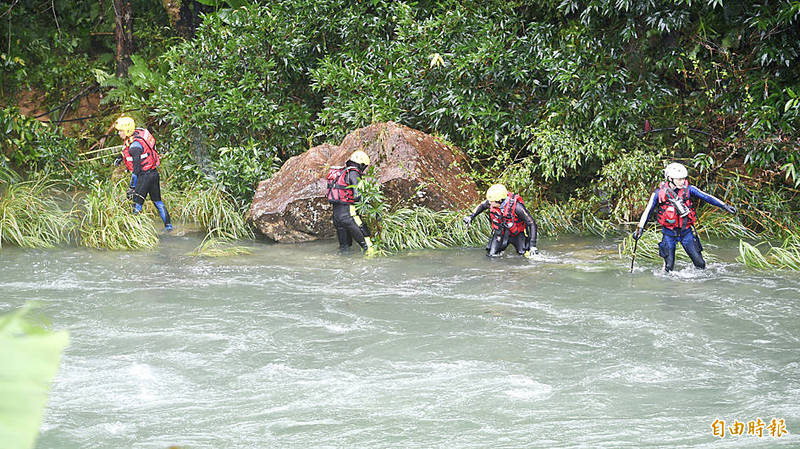 LIABILITIES MULLED: New Taipei City Mayor Hou You-yi said Taipei would find out if the firm was legally registered, the guide was licensed and the weather was assessed

The assets of Tian Da Local Nature Co are to be frozen after at least four people died after falling into the Beishi River （北勢溪） on an outing the company had organized on Saturday, the Taipei City Government said yesterday.

Six people — two adults and four children — were washed away by a flash flood on the river in New Taipei City’s Hubaotan （虎豹潭） area. They were participating in a Nature Joy Camp outdoor activity with a group of 16 adults and 15 children led by a guide surnamed Su （蘇）.

As of 4:30pm yesterday, four of the missing had been found dead. The search continued for two missing children.

Tian Da Local Nature Co is registered in Taipei’s Daan District （大安）, New Taipei City Mayor Hou You-yi （侯友宜） said on Saturday, adding that the Taipei City Government would investigate whether the company was legally registered, whether the guide was licensed and whether they had assessed the weather.

The outdoor activity seemed to be aimed at school-age children and their parents, but a check with the Taipei Department of Education showed that the camp is not registered as a learning facility, she added.

While Tian Da Local Nature is registered at an address on Zhongxiao E Road, Sec 4 in Taipei, it never operated at the location, she said yesterday, adding that the Facebook page was closed after the incident.

Keng urged the business owner to provide an explanation to the public.

Prosecutors and police are investigating the firm, but the business owner has not yet been found, Hou said yesterday, adding that the New Taipei City Government would further clarify the company’s liabilities in the incident.

The six people washed away were Taipei residents, so the city’s Department of Social Welfare has designated a social worker for each case and schools are to provide counseling to the students, Taipei Deputy Mayor Tsai Ping-kun （蔡炳坤） said yesterday.

Taipei Deputy Mayor Vivian Huang （黃珊珊） is also working to clarify the firm’s liabilities in the incident, he said, adding that the city government would not let the company change its registered name or owner, and it would go through the legal procedures to freeze its assets.