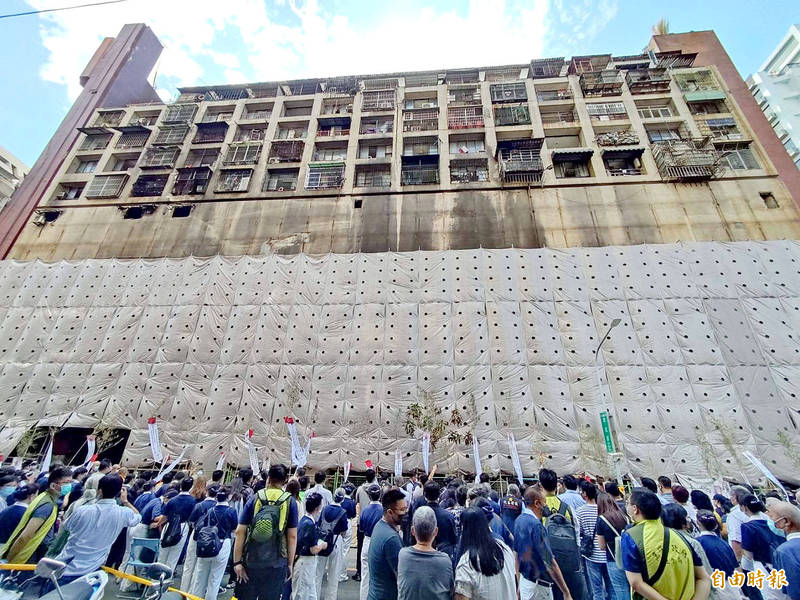 Priests and relatives outside the Cheng Chung Cheng building in Kaohsiung yesterday hold a mourning ceremony for 46 people who died due to a fire in the building on Thursday. Photo: Huang Chia-lin, Taipei Times

LAX REGULATIONS: A lack of adequate safety measures is a problem, the president said, as mandatory management committees are being proposed for all buildings

By Wu Su-wei and Jake Chung / Staff reporter, with staff writer and CNA

The death toll from the fire at the 13-story Cheng Chung Cheng （城中城） building in the early hours of Thursday was the second-highest in Taiwan’s history, behind a February 1995 blaze at the Weierkang Club in Taichung that killed 64.

Speaking after visiting those injured in the fire at the 40-year-old Kaohsiung building, Tsai said that building safety regulations were lax, adding that she had instructed the Cabinet to propose plans to improve the safety of all properties while facilitating urban renewal plans.

She said that government agencies should work with local authorities to reinforce fire safety inspections in older buildings, as well as ramp up efforts to facilitate government-led projects aimed at redeveloping older buildings and neighborhoods.

The most pressing issue is a thorough check of all mixed-use buildings in Taiwan, especially those partially abandoned and in a state of disrepair, and attending to problems within buildings that pose a public safety risk, she said.

The Urban Renewal Act （都市更新條例） states that the central or a local government can plan and implement a redevelopment project to renovate or reconstruct one or several buildings in a designated area.

On Friday, Minister of the Interior Hsu Kuo-yung （徐國勇） said that his ministry is considering amending the law to make it mandatory for all buildings to establish a management committee.

The ministry said that the committees are responsible for building repairs, maintenance and safety, as stipulated in the Condominium Administration Act （公寓大廈管理條例） promulgated in 1995.

However, the law does not apply to the 18,000 mixed-use buildings in the nation’s six special municipalities that were built before 1995, Hsu said.

Although local authorities have since encouraged the establishment of management committees in such buildings, 7,000 to 8,000 still do not have one, he added.

The ministry’s proposed amendment would mandate that all condominiums, regardless of whether they were constructed before 1995, must establish a management committee, Hsu said.

The proposed amendment would take into consideration that business sections of the building should contribute a portion of the management fee, he added.

Hsu also said that the proposed amendments would address loopholes such as buildings not being required to file public safety notices with the local government if the commercial section of the building is vacant, and buildings under 16 floors being exempt from filing public safety reports.