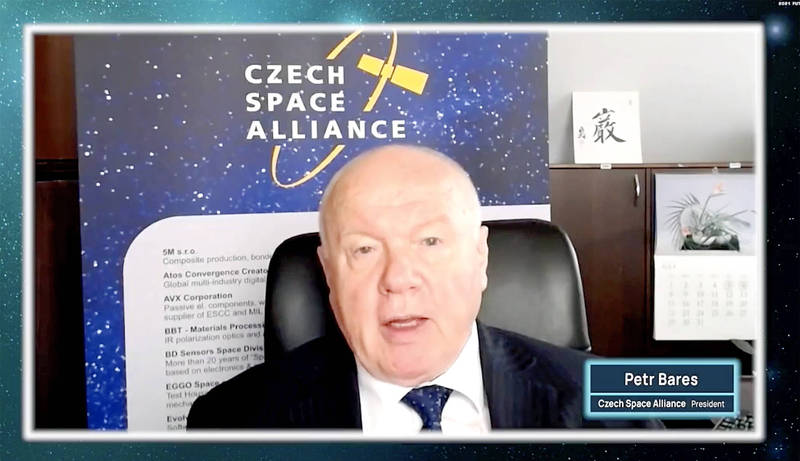 Taiwan and the Czech Republic are to sign a cooperation agreement on space technology during a delegation’s visit to Europe later this month, Czech Space Alliance president Petr Bares said in an online forum yesterday.

The delegation, which is also to include representatives of local businesses, is to visit Slovakia from Wednesday to Saturday next week, the Czech Republic from Saturday next week to Oct. 26 and Lithuania from Oct. 26 to Oct. 30, the source said.

“I would also like to make the announcement that we will have the honor of welcoming a high-level official delegation from Taiwan, which includes the minister of science and technology, whom I had the pleasure to meet last year, and the new director of the NSPO,” Bares said in a pre-recorded video for an online forum at the Future Tech exposition.

Bares was part of a delegation led by Czech Senate President Milos Vystrcil that visited Taiwan in August last year.

The Czech Space Alliance on Oct. 25 plans to sign a memorandum of understanding with the Taiwan Space Industry Development Association, he said.

Bares also announced that the alliance is planning “to organize a mission of space subjects from Taiwan to the Czech Republic” under the auspices of the Czech Ministry of Foreign Affairs and the Czech Economic and Cultural Office in Taipei.

The alliance, consisting of small and medium-sized enterprises, also plans to hold a large event with the Indian Space Research Organisation next year, he said.

The Czech Republic in 2008 formally became a member of the European Space Agency.

Earlier this year, Lithuania became an associate member of the agency, Lithuanian Minister of Economy and Innovation Ausrine Armonaite said in a pre-recorded speech.

More than 30 Lithuanian companies are involved in space supply chains, a number that is expected to increase by 250 percent in five years, Armonaite said.

Lithuania plans to approve its space strategy at the end of this year, she said, emphasizing the importance of investing in people and education.

The Lithuanian government plans to open a representative office in Taiwan later this year.