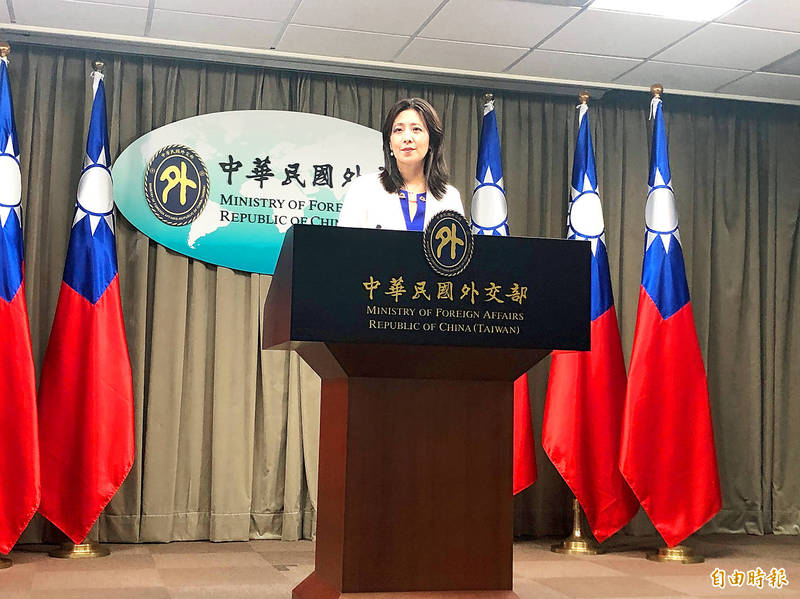 Ministry of Foreign Affairs spokeswoman Joanne Ou speaks at a news conference at the ministry in Taipei on May 11. Photo: Lu Yi-hsuan, Taipei Times

The statement was in repsonse to the embassy writing on WeChat that it firmly opposed Prague’s invitation to Wu.

The Czech Senate Committee on Foreign Affairs, Defense and Security on Wednesday passed a resolution on improving ties with Taiwan in trade and investment, and also invited Wu to attend a meeting in Prague on Oct. 27 to 28.

In Taipei, a Ministry of Foreign Affairs official on Thursday confirmed that Wu had received an invitation from Prague and that negotiations about the visit were under way.

China has become the Czech Republic’s second-largest trade partner and its largest outside the EU, showing that bilateral cooperation is hopeful, the Chinese embassy said.

The embassy called on the Czech Republic not to send the wrong signals to “separatist forces” in Taiwan, to ensure that a Beijing-Prague strategic partnership remains steady and enduring.

Adherence to the “one China” principle is shared in the international community and a criterion of international relations, it added.

China holds no objection to private-sector trade exchanges between its diplomatic allies and Taiwan, but it firmly opposes its allies conducting any official exchanges with Taipei, it said.