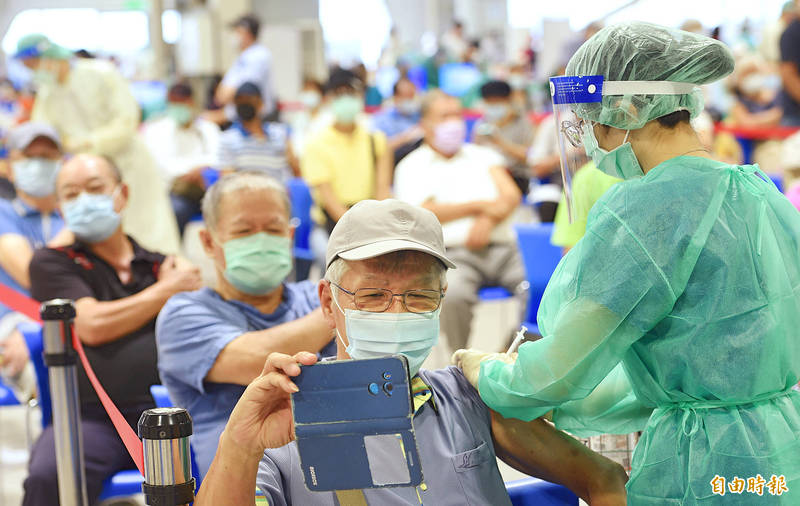 LOCAL TRIALS: A number of Taiwanese research hospitals are involved with phase 3 trials of new antiviral drugs that could reduce COVID-19 hospitalizations

Taiwan is close to signing a contract with US drugmaker Merck to purchase molnupiravir, oral antiviral treatment for COVID-19, Minister of Health and Welfare Chen Shih-chung （陳時中） said yesterday.

Molnupiravir, which is in phase 3 clinical trials, is being tested at multiple locations, including National Taiwan University Hospital （NTUH） and the Ministry of Health and Welfare-affiliated hospital in Taoyuan.

On Oct. 1, Merck said that it would seek authorization for molnupiravir to be used against COVID-19, after the drug was shown to reduce hospitalizations of people newly infected with the virus by 50 percent.

The US government has reportedly agreed to purchase 1.7 million courses of molnupiravir for US$1.2 billion upon the drug’s approval.

Chen could not confirm the facilities’ participation, saying that he would make enquiries.

The Pfizer-BioNTech vaccines are to be administered, alongside the Moderna and AstraZeneca brands in the 12th round of vaccinations to take place from Friday next week to Nov. 3.

The shipment was part of the 15 million doses of the Pfizer vaccine ordered by the Hon Hai Precision Co-affiliated Yonglin Foundation, Taiwan Semiconductor Manufacturing Co and the Buddhist Compassion Relief Tzu Chi Foundation, which are donating the vaccines to the government for distribution.

At its briefing yesterday, the Central Epidemic Command Center reported no new locally transmitted COVID-19 infections or deaths, but said there were eight new imported cases: six men and two women in their teens to 40s who arrived from the Philippines, the US, Ukraine, the United Arab Emirates and Indonesia who entered Taiwan between Sept. 29 and Tuesday, the center said.

The daily number of domestic cases has fallen to between zero and one since Aug. 15, CECC data showed.