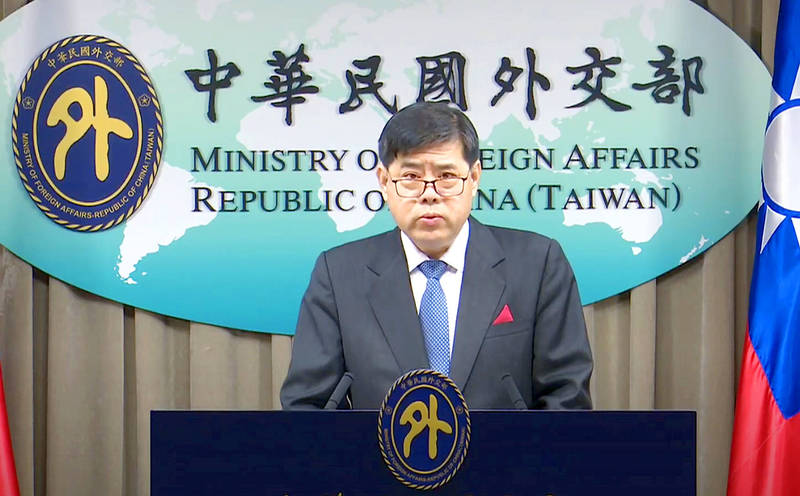 The Ministry of Foreign Affairs’ Department of European Affairs Director-General Remus Chen stands at the ministry’s podium in Taipei yesterday. Photo taken from a Ministry of National Defense live broadcast

The Czech Senate’s Committee on Foreign Affairs, Defense and Security on Wednesday passed a resolution supporting cooperation with Taiwan on innovation, trade and investment, including inviting Minister of Foreign Affairs Joseph Wu （吳釗燮） to a forum in Prague on Oct. 27 and 28, the Ministry of Foreign Affairs said yesterday.

Wu received an invitation and has instructed the Taipei Economic and Cultural Office in Prague to make arrangements for him, Department of European Affairs Director-General Remus Chen （陳立國） said, adding that the ministry would share more details soon.

The resolution also welcomed a visit to the Czech Republic later this month by a delegation to be led by National Development Council Minister Kung Ming-hsin （龔明鑫） and Minister of Science and Technology Wu Tsung-tsong （吳政忠）, Chen said.

Aiming to explore trade opportunities, the delegation of government officials and business representatives is to visit the Czech Republic, Slovakia and Lithuania from Wednesday next week to Oct. 30.

The resolution also urged the Czech government to use the visit to boost cooperation with Taiwan in sectors such as tourism, artificial intelligence, information and communications technology, Internet security, green energy and electric vehicles, as well as the related supply chains, Chen said.

The resolution also called on the Czech government to assist Taiwan in its negotiations with the EU on a bilateral investment agreement, Chen said, thanking Prague for its strong support.