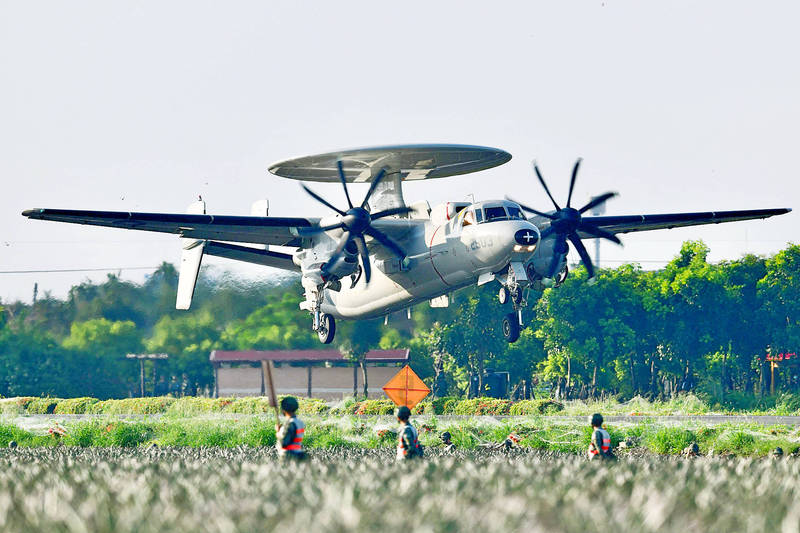 An E2K early warning aircraft takes off from a highway in Pingtung County on Sept. 15. Photo: Sam Yeh, AFP

‘ROCK SOLID’: Maintaining peace and stability in the Taiwan Strait is why the US will continue to assist Taiwan to maintain sufficient defense capability, the Pentagon said

The US Department of Defense on Tuesday reaffirmed its pledge to help Taiwan defend itself against Chinese military coercion.

Asked at a news briefing about the Chinese People’s Liberation Army’s （PLA） recent activities near the Taiwan Strait, Pentagon spokesman John Kirby said that the military maneuvers would only create uncertainty in a region where the US wants to see stability and peace.

“The PRC [People’s Republic of China] has stepped up efforts to intimidate and pressure Taiwan and other allies and partners, including increasing their military activities conducted in the vicinity of Taiwan, the East China Sea and the South China Sea,” Kirby said.

The US believes that those activities “are destabilizing and only increase the risk of miscalculation,” he said.

Despite the recent Chinese shows of force, Kirby said that the US remains committed to keeping the peace in the Taiwan Strait.

“We will continue to support a peaceful resolution of cross-strait issues, consistent with the wishes and best interests of the people of Taiwan,” Kirby said. “Our commitment to Taiwan is rock solid, and contributes to the maintenance of peace and stability across the Strait and within the region.”

Maintaining that peace and stability is “why we’re going to continue to assist Taiwan in maintaining a sufficient self-defense capability,” Kirby said.

Asked if the Pentagon would take any concrete actions to defend Taiwan and whether such actions would require congressional approval, the spokesman said that he would not answer hypotheticals.

He reiterated that Washington is acting in accordance with the US’ “one China policy,” which is different from from Beijing’s “one China principle,” under which the Chinese Communist Party asserts sovereignty over Taiwan.

“We take no position on sovereignty over Taiwan,” he said.

The military maneuvers led to a warning on Wednesday last week by Minister of National Defense Chiu Kuo-cheng （邱國正）, who said that the tensions across the Taiwan Strait “are really the grimmest I have seen in more than 40 years of military service.”

Chiu also warned that while invading Taiwan now would incur a high cost for China, by 2025, Beijing would be able to lower that cost.

Pentagon spokesman John Kirby speaks at a news conference at the Pentagon in Washington on Sept. 30. Photo: AP