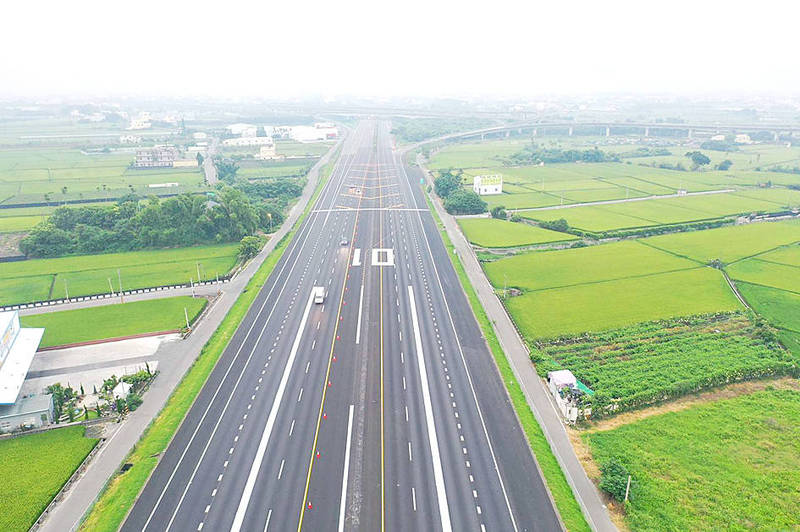 A section of National Highway No. 1 in Changhua County is evacuated on May 27, 2019, to prepare for a military aircraft landing drill. Photo courtesy of the Freeway Bureau

The Ministry of National Defense is reportedly considering using a portion of Provincial Highway No. 9 in Taitung County as an emergency runway, following calls last month for a contingency landing strip better protected from Chinese missiles.

The highway is undergoing a years-long improvement plan that includes a new extension skirting the edge of Guanshan Township （關山）, fueling rumors that the ministry intends to use it as the nation’s sixth emergency runway, the only one that would be on the east coast.

Minister of Transportation and Communications Wang Kwo-tsai （王國材） yesterday confirmed that the defense ministry wants a contingency runway to be built on the east coast, promising full cooperation regarding its ultimate decision.

The original feasibility study for the highway improvement project did not account for use as a runway, which would require a wider road, Directorate-General of Highways Director-General Hsu Cheng-chang （許鉦漳） said.

The defense ministry has been asked to finalize the plan so that the ministries can work together on preparations, he added.

A defense official speaking on condition of anonymity did not deny the plan, but said that many steps would still need to be taken before it could be confirmed.

The existing stretch of Highway No. 9 that runs through Guanshan is only 15m wide, but cannot be easily widened without expropriating and demolishing private buildings.

Transportation officials therefore decided to build a new 30m-wide stretch of road around the town, although a military runway would have to be even wider.

Work on the highway improvement project covering a total of 45.8km is scheduled to be completed in 2027.

The only other provincial highway used as a contingency landing strip is Provincial Highway No. 1 in Pingtung County’s Jiadong Township （佳冬）, where fighter jets practiced landing during the annual Han Kuang exercises last month.