《TAIPEI TIMES》 Many students anxious on return to school: poll 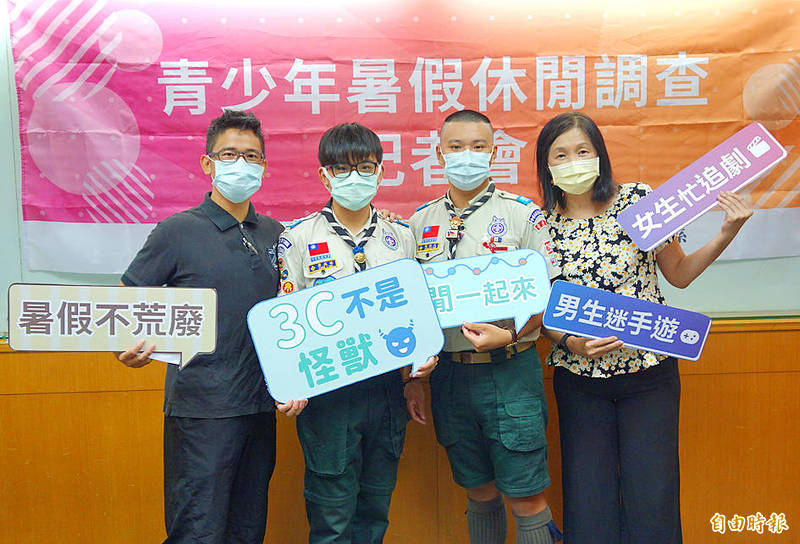 Participants at a news conference held to unveil a survey conducted by King Car Culture and Education Foundation hold signs with some of the activities students engaged in during the summer break. Photo: Wu Po-hsuan, Taipei Times

About one-quarter of students said that they felt anxious about returning to school following the summer break, a King Car Culture and Education Foundation survey released yesterday showed.

The foundation asked students to select up to three activities from a list of 13 that they most often engaged in during July when a nationwide level 3 COVID-19 alert was in effect.

The most popular answer, selected by 59.6 percent of students, was binge-watching TV shows, the survey found.

Meanwhile, 16.8 percent of students said that they engaged in outdoor recreation last month, after the nationwide COVID-19 alert had been downgraded to level 2, the survey showed.

That was up from 6.8 percent of students who said they did outdoor recreation in July, it showed.

Summer vacations give children more opportunities to engage with people and do activities outside of school, foundation executive director Joyce Tseng （曾清芸） told a news conference in Taipei.

Participating in meaningful recreational activities can benefit the learning and development of students, she said.

Due to the impact of a local COVID-19 outbreak in May, many activities were not possible this summer, Tseng said, adding that developing in students a positive attitude toward recreation continues to be important.

The survey targeting students from grade five to 12 was carried out online from Aug. 30 to Sept. 15.

It was designed in collaboration with National Taipei University’s Department of Social Work, collected 7,444 responses, and had a confidence level of 97 percent and a margin of error of 3 percentage points, the foundation said.