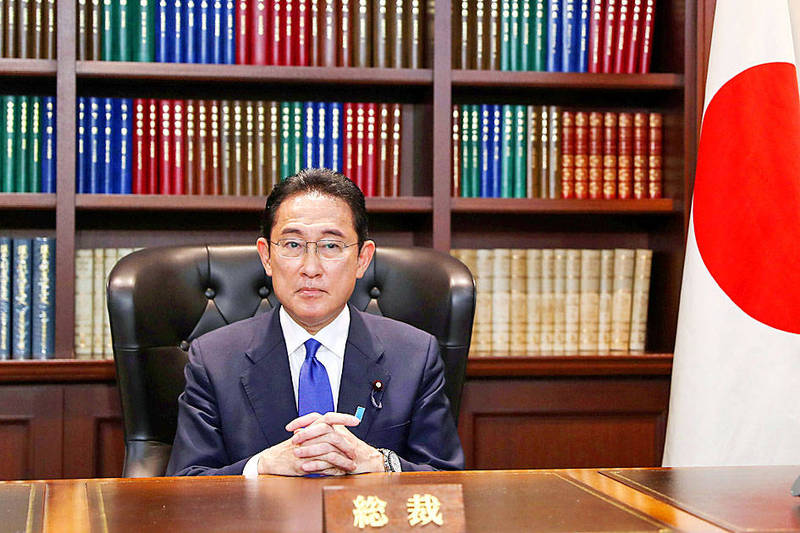 Former Japanese minister of foreign affairs Fumio Kishida poses for a picture following a press conference at the Liberal Democratic Party headquarters after he was elected as party leader in Tokyo yesterday. Photo: Reuters

The Ministry of Foreign Affairs （MOFA） yesterday congratulated Japanese lawmaker Fumio Kishida on his election as the leader of Japan’s ruling party, which has “very close” relations with Taipei.

Kishida, 64, won the race to lead Japan’s Liberal Democratic Party （LDP）, setting him on course to replace Yoshihide Suga as prime minister when parliament votes on Monday next week.

Kishida served as minister of foreign affairs from 2012 to 2017 under then-Japanese prime minister Shinzo Abe.

In Taipei, the foreign ministry issued a statement congratulating Kishida soon after the voting results were confirmed.

The LDP has been friendly to Taiwan and shares a profound friendship with the nation, the ministry said, describing bilateral relations as “very close.”

The Japanese party in February established a task force on Taiwan policy and in June introduced a policy paper on advancing Taiwan-Japan ties, the ministry said.

Last month, the LDP and the Democratic Progressive Party also launched their first dialogue platform for diplomatic and defense matters, it said.

Under the LDP’s rule, the Japanese government has donated more than 3.9 million doses of the AstraZeneca COVID-19 vaccine to Taiwan in five batches, which greatly boosted the nation’s disease prevention measures and were welcomed by the government and the public alike, it said.

The mutual support and trust between Taiwanese and Japanese have been elevated to an “unprecedentedly high” level, it said.

The government sincerely hopes that under the new leadership of Kishida, the LDP would continue to promote Taiwan-Japan partnerships in all areas, and that the two sides would join hands in promoting peace, stability and prosperity in the Indo-Pacific region, it said.

Kishida had visited Taiwan when he was the head of the LDP’s youth division, and he continues to pay attention to Taiwan-related issues, he wrote.

In an interview with Bloomberg News published on Sept. 3, Kishida said “Taiwan is at the front line of the standoff between the US and China.”

“Looking at the situation with Hong Kong and the Uighurs, I have a strong feeling that the Taiwan Strait will be the next big problem,” he said at that time, adding that a contingency in the Taiwan Strait would have an enormous effect on Japan.