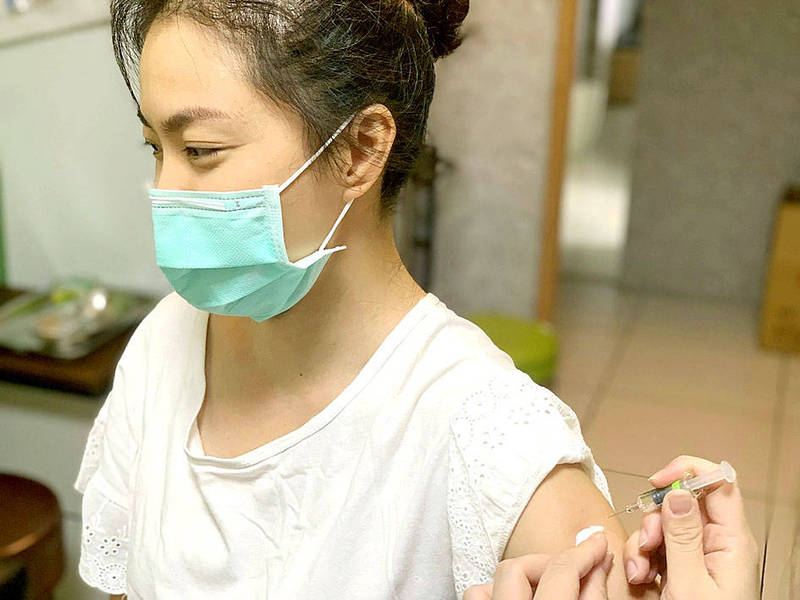 A woman is given a Medigen COVID-19 vaccine shot in Taichung in an undated photograph. Photo courtesy of the Taichung City Government

The Central Epidemic Command Center （CECC） yesterday reported one locally transmitted COVID-19 infection and six imported cases, while announcing that second doses of the AstraZeneca and Medigen COVID-19 vaccines would be provided in the 10th round of the vaccination program, to be administered early next month.

Centers for Disease Control （CDC） Deputy Director-General Chuang Jen-hsiang （莊人祥）, the CECC spokesman, said that the local case is a man in his 50s who lives in Taipei and tested positive on Monday in a self-paid test.

The man is asymptomatic and had been working from home in the three days before he tested positive, Chuang said.

CDC Deputy Director-General Philip Lo （羅一鈞）, deputy head of the CECC’s medical response division, said the man had not been vaccinated and has not been identified as a close contact of a confirmed case, so the source of infection is still being investigated.

Chuang said that the six imported cases were from Japan, Singapore, Vietnam and the US.

Five of the six people had been vaccinated against COVID-19, Lo said, adding that two had only received one dose of the AstraZeneca vaccine, while two other cases had been diagnosed with COVID-19 in Japan before being fully vaccinated, so only one case is considered a “breakthrough infection.”

Meanwhile, Chuang announced that second doses of the AstraZeneca and Medigen COVID-19 vaccine would be provided in the next round of vaccinations between Wednesday next week and Oct. 12.

Eligible recipients for the AstraZeneca vaccine are people aged 50 and older who received their first dose more than 10 weeks ago, he said.

While people aged 65 and older would be informed of the date and location of the vaccination by their local health department, those aged 50 to 64 would need to book an appointment on the national online vaccination booking system between 10am on Sunday and 4pm on Monday next week, he said.

Eligible recipients for the Medigen vaccine are people who received their first dose more than four weeks before Wednesday next week, Chuang said.

Asked to confirm reports that some schools have had to suspend vaccinations of students, Chuang said that a delay in vaccine supply occurred and there is a shortage of 300,000 doses to be filled when the next shipment arrives.