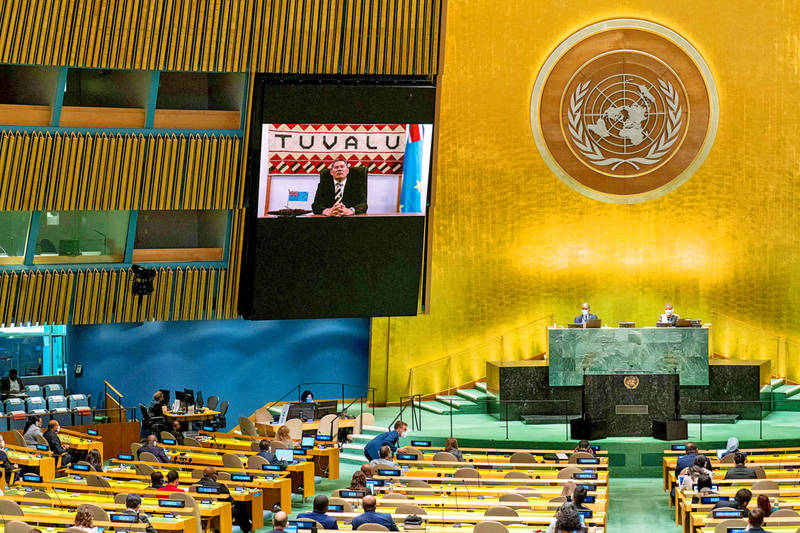 ‘FRESH SOLUTIONS’: The UN would be living up to its objectives by including Taiwan, Eswatini said, while Tuvalu called for Taiwanese citizens to be allowed into UN premises

Five more diplomatic allies on Saturday spoke up at the UN General Assembly in support of Taiwan’s inclusion: Eswatini, Haiti, Saint Lucia, Saint Vincent and the Grenadines, and Tuvalu.

Twelve of Taiwan’s 15 diplomatic allies that are UN members have so far spoken out on behalf of the nation at the General Assembly — tying last year’s number.

In a pre-recorded address, Saint Lucian Prime Minister Philip J. Pierre said that his country was calling for Taiwan to be accepted as a “legitimate participant” in the global decisionmaking process.

Eswatini Prime Minister Cleopas Dlamini said that excluding Taiwan from the UN and discriminating against its citizens in a system meant to serve all of the world’s citizens is a “gross violation of the unshakeable principles of the UN Charter.”

The African kingdom urged the UN to allow Taiwan to participate in the WHO, the International Civil Aviation Organization and the UN’s Framework Convention on Climate Change.

“With this inclusion of Taiwan, it is our hope that the UN will be living up to its objectives and equally serving the interests of all its member states,” he said.

He praised Taiwan for the medical assistance it has given Eswatini during the COVID-19 pandemic.

Calling Taiwan an “indispensable partner,” Dlamini said that the nation would play a meaningful role in the global body if given the opportunity.

Saint Vincent and the Grenadines Prime Minister Ralph Gonsalves said in his address that allowing Taiwan to participate in international multilateral organizations — collaborating on issues such as healthcare, climate change, civil aviation and crime — would benefit the world.

“Taiwan is a relatively small, but legitimate, political expression of the magnificent Chinese civilization. It has been an impressive economic miracle; it is a thriving democracy and it has a right to ask for meaningful inclusion in the relevant global institutions,” he said.

Haitian Prime Minister Ariel Henry called on all member states to consider including Taiwan in the UN system.

Taiwan wants to play — and can play — a significant role in UN initiatives, to promote peace, security and cooperation around the globe, he added.

Tuvaluan Prime Minister Kausea Natano called for the UN to recognize that Taiwanese have a right to access UN premises.

It is “most regrettable” to see the ongoing injustice of Taiwanese being barred from visiting or having meetings on UN premises simply because the UN fails to recognize their passport, Natano said.

“Granting Taiwanese passport holders access to UN premises is an essential step for the meaningful participation of Taiwan and the Taiwanese people in the UN system,” he added.

Vatican Secretary of State Cardinal Pietro Parolin was the only representative of Taiwan’s diplomatic allies who did not mention the nation in his address at the General Assembly on Saturday.

The Holy See — Taiwan’s only diplomatic ally in Europe — is a UN observer, not a member, and rarely speaks on political issues at UN meetings.

Nicaragua — an ally in Central America — is expected to speak today, the last day of the General Debate.