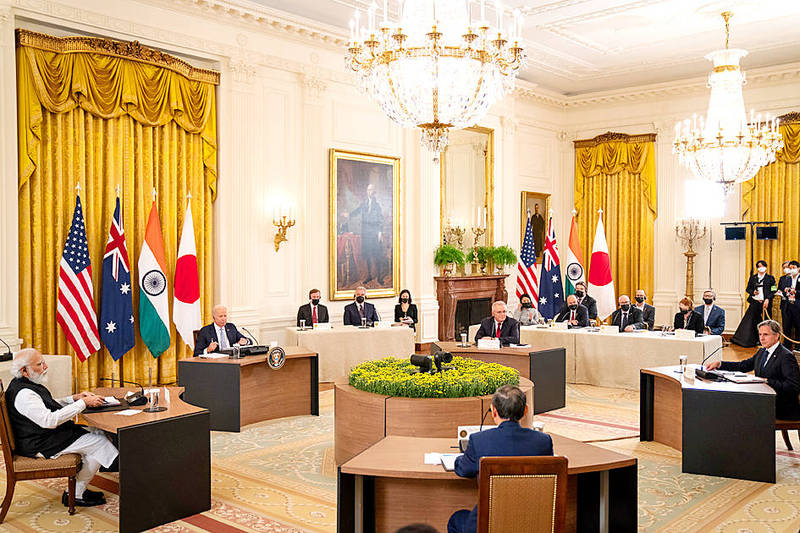 BROAD AGENDA: Leaders of the Quad said they stand for freedom of navigation and overflight, and laid out plans to combat COVID-19 and limit carbon emissions

US President Joe Biden and the leaders of Australia, India and Japan promised on Friday to work together for a stable, open and democratic Indo-Pacific in a veiled dig at China during their first in-person summit together.

In Biden’s latest effort to cement US leadership in the face of a rising China, the Quadrilateral Security Dialogue （Quad） agreed to move ahead on a joint plan to provide COVID-19 vaccines across Asia, launched a new climate initiative and said the four nations would begin holding annual summits.

Without any explicit mention of China, the leaders of the four democracies in a joint statement said they were committed to “promoting the free, open, rules-based order, rooted in international law and undaunted by coercion.”

“We stand for the rule of law, freedom of navigation and overflight, peaceful resolution of disputes, democratic values and territorial integrity of states,” the statement said.

Australian Prime Minister Scott Morrison, speaking as the talks opened, said that the four “liberal democracies” were working to build a “strong, stable and prosperous region.”

While the leaders carefully avoided public mention of China, Suga voiced “strong concern” during the talks about Beijing’s assertiveness at sea, its trampling of Hong Kong’s special status and its mass incarceration of the Uighur minority, Japanese Ministry of Foreign Affairs spokesman Tomoyuki Yoshida said.

Biden, who often talks about democracies needing to prove their capability in an age of powerful autocracies in Russia and China, sought to show that the Quad was about action.

“We’re four major democracies with a long history of cooperation. We know how to get things done and we are up to the challenge,” he said.

India said it would export 8 million one-dose Johnson & Johnson vaccines by the end of next month.

During virtual talks in March, the Quad leaders said they would supply more than 1 billion vaccines by the end of next year, with India providing production, Japan and the US financing and Australia the logistics.

On another key priority for Biden, the Quad leaders said the four nations would all make “ambitious” announcements at the upcoming Glasgow climate summit with an aim of bringing the warming planet to net-zero emissions by 2050.

US officials said they did not see the Quad as a military alliance even as they sought to broaden cooperation.