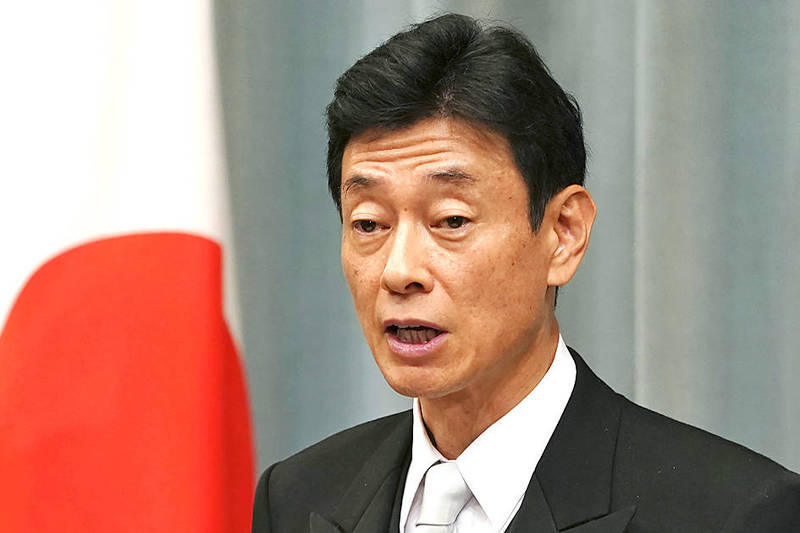 NOT QUALIFIED: Taiwan shrugged off China’s opposition to its bid, saying it is not a member and its trade system does not meet world standards

Japanese officials’ appreciation of Taiwan’s values with regard to democracy and rule of law contrasted with Tokyo’s cautious reaction to China’s bid to join the Comprehensive and Progressive Agreement for Trans-Pacific Partnership （CPTPP）.

“We consider Taiwan a very important partner with which we share fundamental values such as freedom, democracy, basic human rights and rule of law,” Japanese Minister for Economic and Fiscal Policy Yasutoshi Nishimura told a news conference.

Japan is chairing the pact this year.

After Taiwan made the application on Wednesday, the Chinese Ministry of Foreign Affairs said it opposed Taiwan “entering into any official treaty or organization.”

In Taipei, the Ministry of Foreign Affairs said: “The Chinese government only wants to bully Taiwan in the international community, and is the arch criminal in increased hostility across the Taiwan Strait,” it said.

China is not a member of the CPTPP and its trade system has been widely questioned globally for not meeting the high standards of the bloc, it said.

“Joining CPTPP will strengthen Taiwan’s key global strategic and economic and trade status, and further integrate us with the world,” Tsai said in Keelung yesterday.

While Japan said Taiwan’s application would need to be scrutinized against the trade pact’s strict standards, the positive reaction stood in contrast to a cautious response to China’s application on Thursday last week.

Japanese Chief Cabinet Secretary Katsunobu Kato yesterday sidestepped a reporter’s question about the different reactions to the applications, declining to go into specifics on Japan’s position on China, but referring to values shared with Taiwan.

Kato added that under the trade pact’s rules, membership was open to Taiwan, adding that it was already an independent member of the WTO and APEC.

During a debate broadcast online, one of the candidates, former minister of foreign affairs Fumio Kishida, “welcomed” Taiwan’s application, saying Japan and Taiwan share values such as human rights.

Japanese Minister of Administrative Reform and Regulatory Reform Taro Kono also said he supported Taiwan’s participation in the WHO.

“Considering economic exchanges between Japan and Taiwan, I think it is a very happy thing that Taiwan will join after passing TPP’s [Trans-Pacific Pact’s] high standard. Definitely, I would like to support,” Kono said.