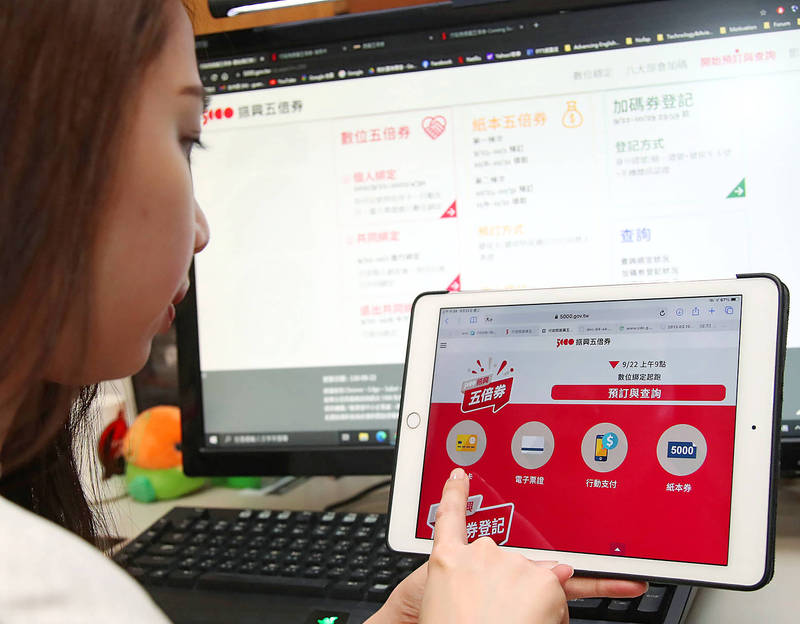 Nearly 2.07 million people yesterday applied for the digital version of the Quintuple Stimulus Vouchers, which the government is to issue to stimulate consumer spending, the Ministry of Economic Affairs （MOEA） said.

At 9am, a government Web site began to accept applications from people who intend to link the vouchers, valued at NT$5,000 （US$180）, to a credit card or mobile payment service. The stimulus vouchers can be used from Oct. 8.

The Web site recorded heavy traffic during the first three hours, as more than 3.51 million people visited the site, the ministry said, adding that by 9pm, the Web site had recorded 10.28 million visits.

Of the applications, 1.61 million were for personal use, while 463,508 were for pooled used with friends or relatives, ministry data showed.

She reminded those who would prefer the physical version of the vouchers to register through the Web site from Saturday and to spend them before April 30 next year.

This is the second time that the government has issued spending vouchers to boost consumption after COVID-19 restrictions affected many retail businesses.

In July last year, the government issued the first round of spending vouchers of NT$3,000, for which people needed to pay NT$1,000 and which expired on Dec. 31 that year. This time, no upfront payment is required.

According to the ministry, 23.32 million people, or 98.35 percent of those eligible, collected the vouchers in the first round, leading to spending of nearly NT$64.48 billion.