《TAIPEI TIMES》 US to open up to vaccinated foreigners 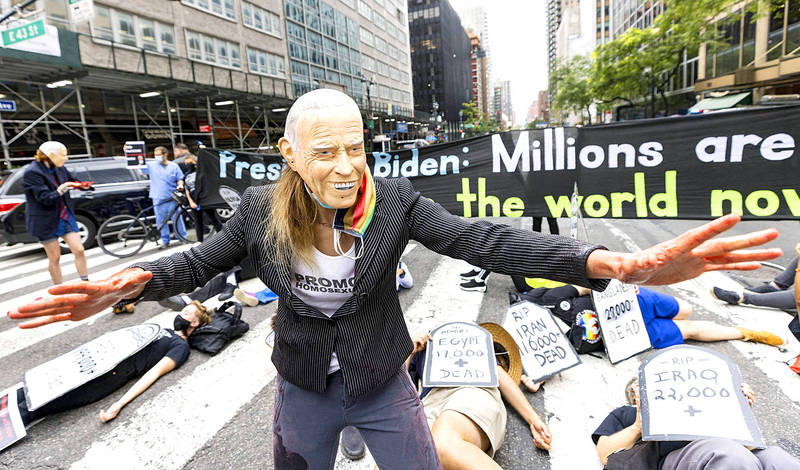 A protester in a mask depicting US President Joe Biden looks on as people hold a “die-in” and block New York City’s 2nd Avenue during a rally on Sunday near the UN headquarters calling on Biden and the international community to help provide wider access to COVID-19 vaccines. Photo: EPA-EFE

CLOSED DOORS? The new US rules, which are to be implemented in November, have sparked concern in Taiwan, given its low fully vaccinated coverage rate

The US plans to allow entry to most foreign air travelers as long as they are fully vaccinated against COVID-19 — while adding a testing requirement for unvaccinated Americans and barring entry for foreigners who have not received shots.

The measures announced on Monday by the White House mark the most sweeping change to US travel policies in months, and widen the gap in rules between vaccinated people — who would see restrictions relaxed — and unvaccinated people. The new rules would replace existing bans on foreigners’ travel to the US from certain regions, including Europe.

While the move would open the US to millions of vaccinated people, the White House cast the measure as a crackdown, pointing to stricter testing rules and a new contact tracing regime.

The new policy is to take effect in “early November,” the White House said.

“We know vaccines are effective, including against the Delta variant [of SARS-CoV-2], and vaccines are the best line of defense against COVID, so this vaccination requirement deploys the best tool we have in our arsenal to keep people safe and prevent the spread of the virus,” White House Coronavirus Response Coordinator Jeff Zients told reporters.

The new rules are to replace the current system, which includes outright bans on entry for most foreigners who have been in certain regions — including the UK, the European Schengen area, China, India, South Africa and Brazil — within two weeks of arrival, regardless of vaccination status.

In Taipei, asked how the new rules would affect Taiwan, Minister of Health and Welfare Chen Shih-chung （陳時中） said that based on his understanding, the policy would lift the ban on entry by foreign nationals from more than 30 countries, but whether the new rules would apply to all foreign arrivals is still being discussed.

Taiwanese travelers are currently not prohibited from entering the US, but whether the new policy would apply to Taiwanese and which COVID-19 brands would be recognized by the US government have not yet been decided, he said.

The Central Epidemic Command Center （CECC）, which Chen heads, will keep in close contact with the Ministry of Foreign Affairs about the issue, he said.

As of Friday, Taiwan had a fully vaccinated rate of 6.73 percent, CECC data showed.

While the US Centers for Disease Control and Prevention is working on the new regulations, US officials said that the agency currently considers people fully vaccinated when they have received the full course of a shot listed for emergency use by the WHO. A number of vaccines have been approved by the WHO, including those from AstraZeneca and Chinese developers Sinopharm Group Ltd （國藥控股） and Sinovac Biotech Ltd （科興生物）.

Under the new system, vaccinated travelers would have to show proof as they board a plane and would still need a pre-flight COVID-19 test, within three days of departure. They would also need to provide a phone number and e-mail to go into a contact-tracing system that does not yet exist.

A White House official said it was not yet clear if the US would maintain the current testing rules, which allow virtually any authorized test, or require a more accurate type of test, which tends to take longer and cost more.

Unvaccinated American travelers would need to test within one day of departure, and Zients said they would be “required” to test again on arrival.