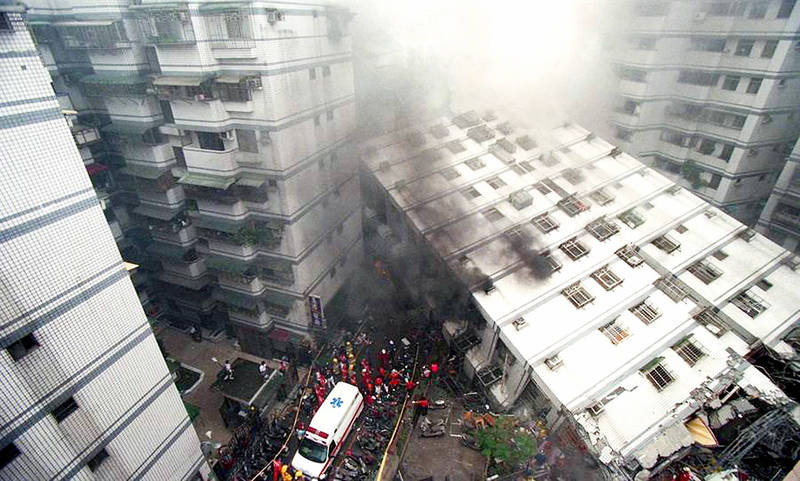 The Central Weather Bureau yesterday received about 50,000 views on Facebook after it posted the data that it collected on Sept. 21, 1999, when the nation was devastated by a magnitude 7.3 earthquake.

The data showed that the 921 Earthquake hit the nation at 1:47am, with the epicenter being 7km southwest of the bureau’s quake detection center in Nantou County’s Yuchi Township （魚池） at a depth of 8km.

Even after 22 years, the quake remains a horrifying memory for many Taiwanese, the bureau said.

The quake was later identified to have been triggered by the movement of the Chelungpu Fault （車籠埔斷層）, leaving a 105km-long surface rupture in central Taiwan, the bureau said.

The massive earthquake prompted the government to upgrade the national disaster relief system related regulations, the bureau said, adding that it also inspired the bureau to continue to improve its earthquake early warning system.

“We started developing the earthquake early warning system in the 1990s. By 1999, the system was able to locate an epicenter about 102 seconds after a quake occurred,” the bureau said. “After the 921 Earthquake, we further upgraded the system by installing more quake detectors across the nation and off the coast, and applying cutting-edge computing technology. By 2016, Taiwan became the third country in the world able to issue early earthquake warnings, following Mexico and Japan.”

The system can now disseminate an alert within 10 seconds of a quake being detected, the bureau said.

The bureau’s post drew 50,000 views in the first eight hours, with nearly 200 people recalling their experiences of the night.

“I was in Taipei when the earthquake happened. First I heard the rumbling sound that people usually hear before an earthquake, which was similar to noises produced on construction sites. Then my apartment started shaking vertically and stopped shaking all of a sudden. We thought it was over, until we experienced much more severe shaking. Next thing I knew there was a major power outage, and we did not know about disasters in other parts of the country until the next day,” Amy Hsieh wrote.

Johnson Cho said that he was working a midnight shift at a convenience store when the earthquake struck.

“Two-thirds of the alcohol on the high shelves fell to the ground, and we spent all night cleaning the debris scattered all over the place,” Cho wrote. “As the convenience store was the only place in the neighborhood that had electricity, people who needed to go to work the next day came into the store to buy steamed buns for breakfast. That was the most steamed buns I sold in a day.”

A woman surnamed Wang （王） said that she was living in Taichung’s Taiping District.

“Our house did not collapse, but there was a big crack in the wall. We then spent nearly 10 days sleeping in a tent in an elementary-school playground,” she wrote. “When we eventually returned home, all of us moved our mattresses and pillows down to the ground floor, in case there were strong aftershocks and we needed to run out of the door immediately.”