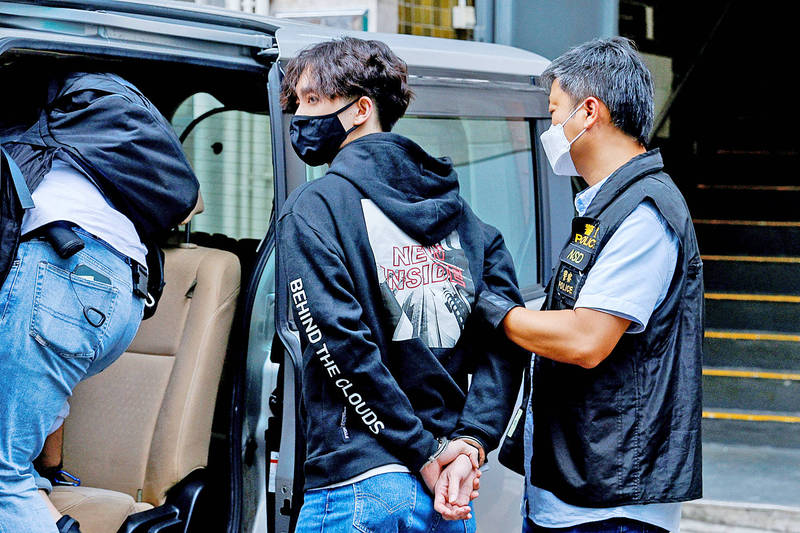 The 1,500-member panel that picks Hong Kong’s next leader would have only one opposition-leaning member, results showed yesterday from a tightly controlled selection process amid a crackdown on dissent in the territory, as police arrested three student members of one of Hong Kong’s last remaining pro-democracy organizations.

On Sunday, select Hong Kong residents voted for members of the Election Committee that would choose the territory’s leader and nearly half of the legislature in the first polls following reforms aimed at ensuring that candidates are loyal to Beijing.

Results were expected to be announced by midnight, but due to several delays they were only announced at 8am yesterday.

Authorities said there were problems with the ballot verification papers, and that it was likely that officials were filling in paperwork incorrectly, causing the delays.

The committee in December would select 40 of 90 lawmakers in the legislature, as well as elect Hong Kong’s leader during voting in March next year.

The only opposition-leaning candidate was elected in the social welfare sector. Of the more than 400 candidates who were running for seats, just two were friendly to the opposition camp in Hong Kong, with the rest being pro-Beijing candidates.

Li said the group, founded in May last year, incited subversion of the state through their social media platforms and street booths.

Examples he gave included urging residents not to use the territory’s contact tracing app, urging people to prepare themselves for the next “revolution” and comments that their group was targeting both the Hong Kong government and the Chinese Communist Party.

Li said police also seized snacks that the group had collected for followers to give to people jailed over democracy protests two years ago.

“It’s not a problem to help those in jail,” Li said. “But their intention is to help inmates with kindred spirits, then to solicit followers and increase their influence in order to endanger national security.”