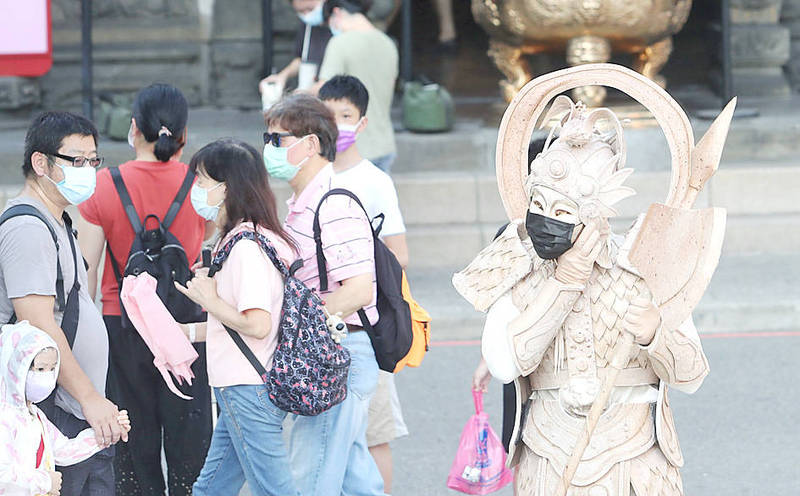 A street performer puts on a mask to meet disease prevention requirements before beginning a performance in Taipei yesterday. Photo: CNA

NEW REGULATIONS: People working at conventions and trade fairs must now provide a negative COVID-19 test or proof of vaccination when entering the site

The nationwide level 2 COVID-19 alert has been extended for another two weeks to Oct. 4, the Central Epidemic Command Center （CECC） said yesterday.

Since July 27, Taiwan has been on level 2 alert, which was to expire today, before the center announced a fourth extension.

Under the alert, people must wear a mask when they are not at home, and the number of people attending indoor and outdoor gatherings is capped at 80 and 300 respectively, the center said.

Social distancing rules would remain in place for businesses and public spaces, it said, adding that entertainment venues, such as dance halls, bars, clubs and KTV parlors, would not be allowed to open.

The Ministry of Economic Affairs also announced a new set of rules for conventions and trade fairs, which require organizers to submit a disease prevention plan to local governments three weeks before the event is to be held.

The rules require at least 60 percent of the people working at an event to have received at least one COVID-19 vaccine shot, and all of them must provide a negative COVID-19 test or their vaccination record when entering the site, the center said.

The ministry has been offering event organizers subsidies to help pay for their operations and employees’ salaries from July to this month, Bureau of Foreign Trade Director-General Cynthia Kiang （江文若） said.

The center reported one local and 11 imported COVID-19 cases, as well as one death.

The domestic case is a Taipei resident in her 60s.

She tested negative for COVID-19 on Sept. 10, prior to being admitted to hospital, but her daughter, who planned to accompany her during her hospital stay, tested positive on Wednesday.

The woman was tested again on Friday, and the result was positive, the center said.

Two other people in the woman’s family tested positive for COVID-19 in May, as well as her daughter’s boyfriend, the center had said previously.

The 11 new imported cases are five Taiwanese and six foreign nationals who had traveled to Taiwan from Cambodia, Canada, the Czech Republic, Honduras, Myanmar, Poland, Russia, Singapore, South Africa and the US.

Five were breakthrough infections, as they came down with the disease at least 14 days after receiving the one — one person received the Johnson & Johnson vaccine — or two shots they needed to be fully vaccinated against COVID-19, the center said.

The death reported yesterday was a man in his 70s who passed away on Sept. 10, it added.

Minister of Health and Welfare Chen Shih-chung （陳時中）, who heads the center, urged people who are traveling during the four-day Mid-Autumn Festival holiday to follow disease prevention measures.

Even though the holiday is a chance for people to relax, they should wear masks, wash their hands often and maintain social distancing, he said.