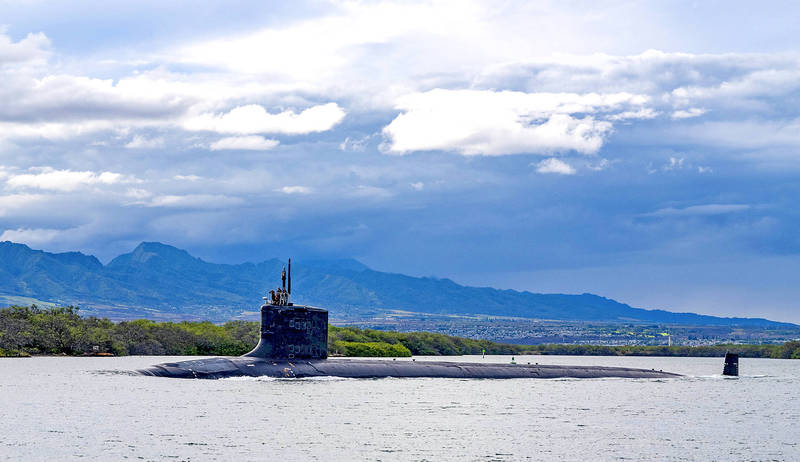 The Virginia-class fast-attack submarine USS Missouri departs Joint Base Pearl Harbor-Hickam for deployment in the US Seventh Fleet area of responsibility on Sept. 1. Photo: AP

BUILDING SUPPORT: Although the Ministry of Foreign Affairs welcomed AUKUS, it said that it was not ‘asking the UK or any other country to fight on our behalf’

Australia and the US on Thursday announced expanded military cooperation, including rotational deployments of all types of US military aircraft to Australia, a day after announcing a submarine deal denounced by China as intensifying a regional arms race.

Speaking after meetings between US and Australian foreign and defense ministers, Australian Minister for Defence Peter Dutton said the two sides would be “significantly enhancing our force posture cooperation, increasing interoperability and deepening alliance activities in the Indo-Pacific.”

“This will include greater air cooperation through rotational deployments of all types of US military aircraft to Australia,” Dutton told a joint news conference in Washington.

US Secretary of Defense Lloyd Austin said the meeting had endorsed “major force-posture initiatives that will expand our access and presence in Australia.”

On Wednesday, the US and Britain said they would provide Australia with the technology and capability to deploy nuclear-powered submarines through a pact called AUKUS.

The US and its allies are looking for ways to push back against China’s growing power and influence, particularly its military buildup, pressure on Taiwan and deployments in the contested South China Sea.

In Taipei, Ministry of Foreign Affairs spokeswoman Joanne Ou （歐江安） yesterday welcomed the formation of AUKUS, adding that “it doesn’t imply that we are asking the UK to get involved in the conflict across the Taiwan Strait.”

She was referring to a question from former British prime minister Theresa May to British Prime Minister Boris Johnson in the House of Commons in London on Thursday about the possibility of Britain defending Taiwan from a Chinese invasion.

“We are responsible for Taiwan’s national security, we are not asking the UK or any other country to fight on our behalf,” Ou said.

“Of course we would appreciate very much the support of the international community and like-minded countries, but that is not an imperative,” she added.

Chinese Ministry of Foreign Affairs spokesman Zhao Lijian （趙立堅） said it was “highly irresponsible” for the US and Britain to export nuclear technology.

At a meeting of the heads of state of the Shanghai Cooperation Organization in Tajikistan yesterday, Chinese President Xi Jingping （習近平） vowed to resist “interference from external forces.”

Xi urged members of the group to “absolutely resist external forces to interfere [in] countries in our region at any excuse, and hold the future of our countries’ development and progress firmly in our own hands.”

Morrison said Australia wanted to boost peace and stability in the Indo-Pacific region.

Australia’s nearest neighbor after Papua New Guinea, Indonesia, was “deeply concerned over the continuing arms race and power projection in the region,” the Indonesian Ministry of Foreign Affairs said in a statement.

News of the alliance received a positive response in Singapore.

Singaporean Prime Minister Lee Hsien Loong （李顯龍） told Morrison in a telephone call that he hoped the nuclear deal would “contribute constructively to the peace and stability of the region and complement the regional architecture,” the Singaporean Ministry of Foreign Affairs said.

Additional reporting by AP and The Guardian