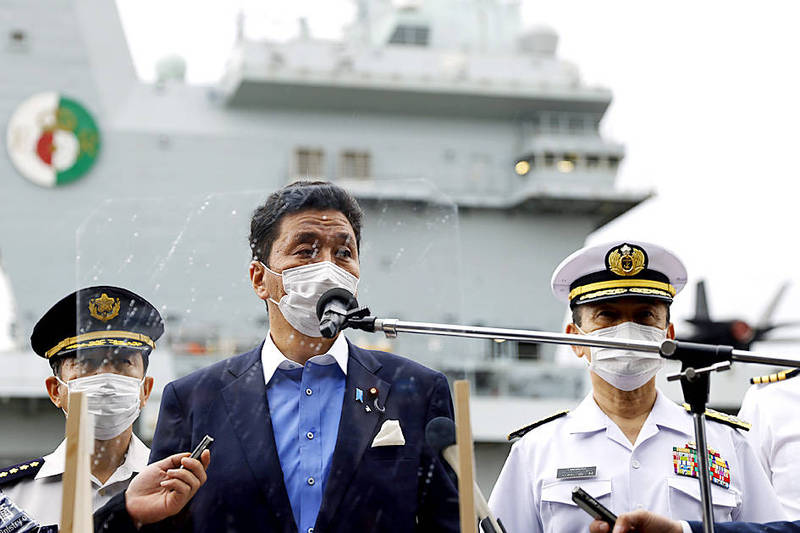 Japanese Minister of Defense Nobuo Kishi speaks to reporters after inspecting the Royal Navy’s HMS Queen Elizabeth at the US naval base in Yokosuka, Japan, on Monday last week. Photo: Bloomberg

Japan would defend the Diaoyutai Islands （釣魚台） — known as the Senkaku Islands in Japan — against Chinese aggression, and considers Taiwan a crucial link in its energy supply, Japanese Minister of Defense Nobuo Kishi told CNN in an interview published on its Web site yesterday.

Kishi said that Japan would defend the disputed island chain through ship superiority in the surrounding waters.

“Against Chinese action to Senkaku Islands and other parts of the East China Sea ... we have to demonstrate that the government of Japan is resolutely defending our territory with the greater number of Japanese coast guard vessels than that of China,” Kishi said.

“There is no territorial dispute relating to the Senkaku Islands between Japan and other countries,” he added.

Regarding Taiwan, Kishi told CNN: “What’s happening in Taiwan is directly linked to Japan,” adding that Taiwan sits astride the “energy lifeline” that sustains his country.

“Ninety percent of the energy that Japan uses is imported through the areas around Taiwan,” Kishi said.

“What could happen in Taiwan could likely be an issue for Japan, and in that case, Japan will have to take the necessary response to that situation,” he said, adding that conflicts should be resolved by dialogue, not military force.

Kishi said that Japan is willing and able to protect what it perceives as part of its sovereign territory and uphold its interests.

Japan has been deploying missiles and troops on Yonaguni island and plans to reinforce nearby Ishigaki, he said.

“This is to demonstrate our strong will to defend our southwestern area of Japanese territory,” he said.

The defense minister has talked about Taiwan’s importance in several recent media appearances.

Kishi on Sunday told the Vietnamese Ministry of National Defense that Taiwan “is a key point for regional maritime security.”

“Peace and stability in the Taiwan Strait are important to both the region and the international community,” he said.

Japan has been expanding the size and capability of its self-defense forces over the past few years, including obtaining advanced F-35B jets, refitting warships into aircraft carriers and forming rapid deployment units.