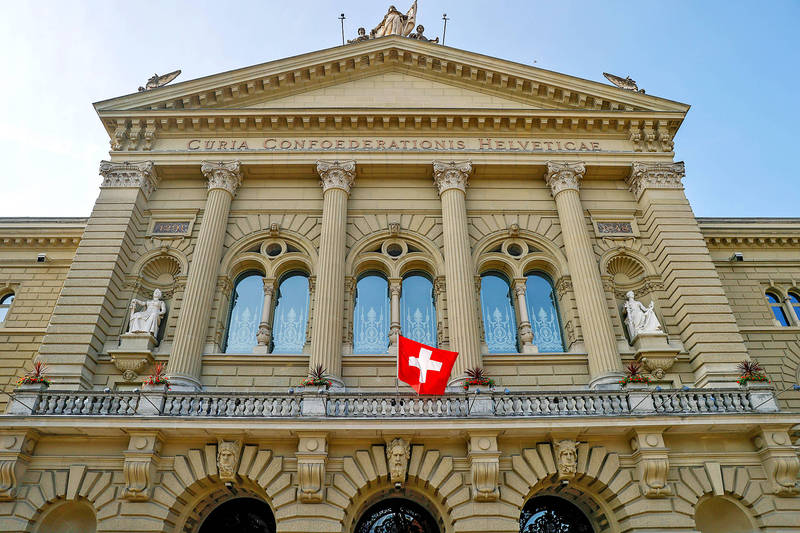 The Swiss national flag is pictured at the Federal Palace in Bern on June 17. Photo: Bloomberg

DEMOCRATIC PARTNER: A Swiss parliament council is to submit a report on how it can deepen its relationship with Taiwan in business, politics, science and culture

Switzerland’s National Council, the lower house of its parliament, on Tuesday passed a motion to improve ties with Taiwan.

Previously approved by the Foreign Affairs Committee in June, the motion was passed by the council with 129 votes in favor, 43 against and five abstentions.

Taiwan “is a partner state with which we share democracy, respect for human rights and the liberal economic order,” Swiss Radio and Television （SRF） quoted National Councilor Nicolas Walder as saying.

The Chinese Communist Party’s disregard for human rights is increasing, as shown by its permanent state surveillance, suppression of freedom of expression and freedom of the press, SRF quoted National Councilor Roland Fischer as saying.

Next, the council is to submit a report on how Switzerland can deepen its ties with Taiwan in business, politics, science and culture.

Representative to Switzerland David Huang （黃偉峰） said he was grateful for the councilors’ support for deeper cooperation with Taiwan.

In Taipei, the Ministry of Foreign Affairs welcomed the motion.

Taiwan and Switzerland share the goal of pursuing sustainable development, and the two countries could join efforts to lay more profound foundations for the goal, ministry spokeswoman Joanne Ou （歐江安） said in a statement yesterday.

The last time the Swiss parliament passed a motion friendly to Taiwan was in 2007, when it required the Swiss government to back Taiwan’s inclusion in the global health system, Ou said.

Switzerland is a like-minded and reliable partner in Europe, she said, adding that the two countries in December last year signed an agreement on the transfer of convicted and sentenced criminals.

The nation has three missions in Switzerland: the Taipei Cultural and Economic Delegation in Bern, its branch bureau in Geneva and the nation’s Permanent Mission of the Separate Customs Territory of Taiwan, Penghu, Kinmen and Matsu to the WTO in Geneva, the ministry’s Web site says.

The European country is represented by the Trade Office of Swiss Industries in Taipei.