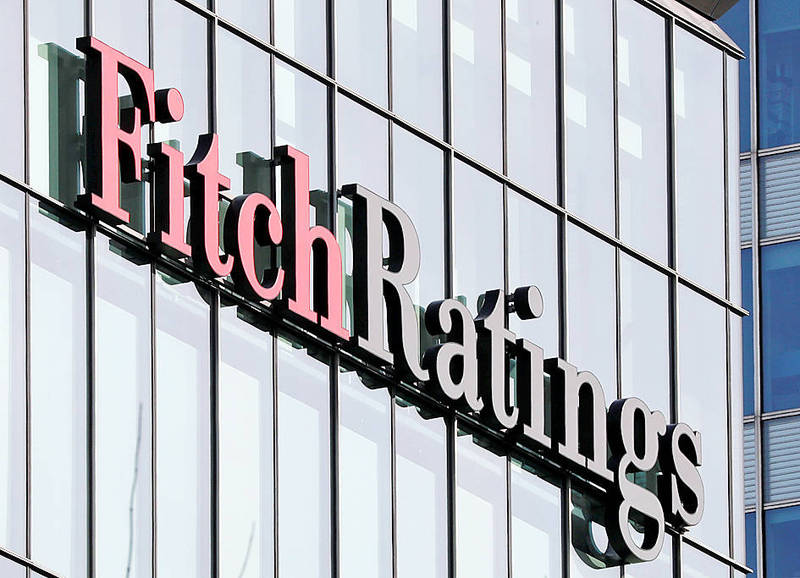 The Fitch Ratings Ltd logo is pictured on a building in an undated photograph. Photo: Reuters

Fitch Ratings Ltd yesterday upgraded Taiwan’s sovereign credit rating to “AA” from “AA-” with a stable outlook, as the nation has gained in economic stability, external finances and fiscal prudence through the COVID-19 pandemic, it said.

Fitch forecast that Taiwan’s GDP would grow 6 percent this year, much higher than the 4.6 percent median for peers of the same rating.

The credit ratings agency attributed Taiwan’s growth momentum to strong exports and its success in containing a COVID-19 outbreak without serious disruption to manufacturing.

However, the nation lags behind other developed countries in vaccination rates, it said, adding that only 45 percent of the population had received a first dose of a COVID-19 vaccine as of Wednesday, and only 4 percent have been fully vaccinated due to shortages.

Merchandise exports increased 30.9 percent year-on-year in the first eight months, thanks to robust global demand for electronics, and information and communications equipment used in smartphones, laptops, TVs, wearables and vehicles.

Demand would remain solid through next year, as the world speeds up a digital transformation and chip shortages linger, it said.

Fitch said it expects Taiwan’s economy to expand 3.3 percent next year and 2.6 percent in 2023.

The rating upgrade reflects improvement in Taiwan’s external finances, which were already sturdy prior to the pandemic, Fitch said.

Taiwan’s current account surplus might widen to 14.8 percent of GDP this year, from 14.2 percent last year, aided by solid exports and a collapse in outbound tourism, Fitch said.

The nation might maintain its large external creditor position at about 200 percent of GDP this year, while its foreign-exchange reserves would cover 17.5 months of current external payments, well surpassing the “AA” median at 3.8 months, Fitch said.

Taiwan also has a record of prudent fiscal management, it said.

The economy’s resilience during the pandemic has enabled authorities to be modest in their use of fiscal stimulus, underscored by a government deficit of just 1 percent last year, Fitch said.

The legislature recently approved an increased special budget — equivalent to about 2 percent of GDP for this year — to support people and businesses heavily affected by the pandemic.

The general government deficit would rise to 2.2 percent of GDP this year, far below a projected median of 5.3 percent among “AA” peers, Fitch said.

Fitch said it expects the deficit to fall to 0.7 percent next year on revenue growth and a gradual unwinding of pandemic-related spending.

Gross general government debt would edge down to 35.8 percent of GDP toward the end of this year, lower than the “AA” median of 43.6 percent, Fitch said.

The central bank and the Ministry of Finance welcomed the upgrade, adding that monetary authorities extended a lending facility for small and medium-sized enterprises through this year and doubled relief loans to support small and private businesses struggling during the pandemic.

However, Fitch referred to Taiwan as being part of China in the headline of its ratings announcement for the first time since at least 2003, triggering confusion among some traders and a rebuke from the government.

While Fitch’s wording change did not have a discernible impact on market prices in China, it did lead to some double takes by traders.

It also elicited a response from the Ministry of Finance, which said in a statement that it regretted Fitch’s decision.