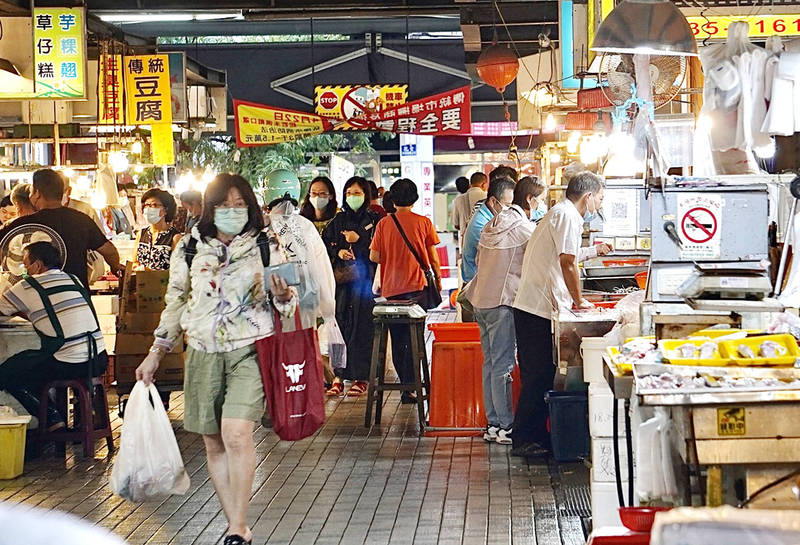 People shop at a wet market in Taipei yesterday. The Executive Yuan yesterday outlined its plans for a new stimulus voucher program, which it said would launch in early October and run until the end of April next year. Photo: CNA

‘WHITELIST’: The program aims to give a boost to small shops, but the National Development Council said that it would also announce a list of approved online retailers

Quintuple Stimulus Vouchers are to be distributed at the beginning of October and would be valid through April next year, the Executive Yuan announced yesterday.

Reservations for the vouchers could be made from the end of next month through the program’s official Web site, Chunghwa Post’s （中華郵政） Web site, convenience store kiosks and digital payment providers, the National Development Council （NDC） told a news conference at the Executive Yuan in Taipei, after presenting the plan at a Cabinet meeting earlier that morning.

Recipients could choose to receive digital or paper vouchers, it said, adding that they would be distributed free of charge starting in the first half of October and could be used until April 30 next year.

Eligible recipients include all Republic of China citizens born before April 30 next year and Alien Permanent Resident Certificate holders, it added.

The council said that it is to open advanced reservation to encourage people to reserve times for pickup, although a specific timetable is still being discussed.

Regarding concerns about the value of the bills, the government requests that people do not demand change from stores, but if shopkeepers are willing to give change for the vouchers, it would respect their decision, Lo said.

As small stores have been the most affected by disease prevention measures this year, the vouchers can only be used at physical stores and at approved online Taiwanese vendors, NDC Minister Kung Ming-hsin （龔明鑫） said, adding that the council plans to announce a “whitelist” of online retailers soon.

Eight secondary voucher programs targeting different sectors are to be offered to a total of 13 million people, up from four programs organized last year, the Cabinet said, adding that program registration would be consolidated onto one platform.

After reserving the Executive Yuan’s Quintuple Stimulus Vouchers on the official Web site, people can select which drawings they wish to enter, so they can win secondary vouchers provided by government agencies, Minister Without Portfolio Audrey Tang （唐鳳） said, adding that the organizing agencies would announce draw schedules and other details.

Whereas at most five sets of the Triple Stimulus Vouchers could be retrieved from post offices, this year, one digital voucher account can add up to four people, even if they are registered at different households, Tang added.