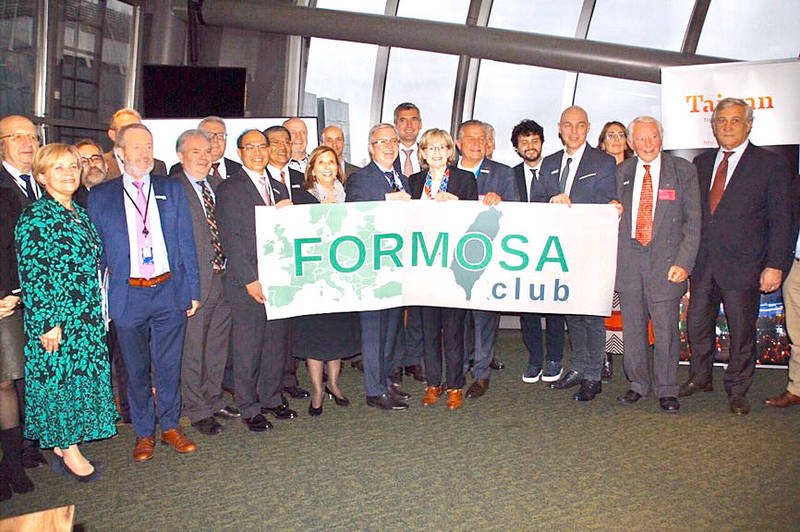 Members of Europe’s Formosa Club, including parliamentary members from 28 countries, celebrate the club’s formal establishment at the European Parliament in Strasbourg, France, on Oct. 17, 2019. Photo courtesy of the Ministry of Foreign Affairs

The Formosa Club, a group of Europe-based lawmakers, on Wednesday called for “a far stronger response” from EU officials to address China’s economic and political campaign to pressure Lithuania for developing ties with Taiwan.

After Lithuania and Taiwan announced their plans to establish representative offices in each other’s capitals, the Baltic nation with a population of about 2.8 million people has faced a series of retaliatory actions from China.

The letter cited several examples of China’s coercive actions against Lithuania, including the recall of its ambassador from Vilnius and its demand that Lithuania does the same; its threat to stop all direct freight trains to Vilnius this month; and its attempt to bar the export of key raw materials to Lithuania.

It comes at a time when Lithuania is facing “an escalating number of hybrid attacks from both Belarus and Russia,” with waves of refugees shipped to its borders from Belarus, the letter said.

“We strongly believe that Lithuania, as a sovereign country, has every right to develop economic and cultural ties with Taiwan and establish respective representative offices, much like the European Union and 15 member states have already done,” it said.

“China’s coercive actions against Lithuania are not only a flagrant violation of international diplomatic norms, but also a brazen attack on Lithuania’s sovereignty,” it said.

The lawmakers urged the EU to take a “more proactive approach” in demonstrating solidarity with Vilnius and supporting its decision to expand ties with Taiwan.

“Lithuania, as a member of NATO, should have the backing of the democratic alliance when dealing with these threats,” they said.

The letter was signed by lawmakers from 28 countries and the European Parliament, including the UK, Canada, France, Germany, the Netherlands, Belgium, Sweden, the Czech Republic, Poland and Lithuania, the Ministry of Foreign Affairs said, thanking them for their support.

Taiwan and Lithuania are situated on the front lines of defending democracy and freedom in Asia and Europe respectively, and their friendship has proven firmer in difficult times during the COVID-19 pandemic, the ministry said.

The nation will continue to work with the US, Europe, Japan and other like-minded countries to resist hybrid threats posed by authoritarian regimes and develop mutually beneficial ties with democratic countries, the ministry said.

Lithuanian State Food and Veterinary Service Director Mantas Staskevicius said that discussions with China about export permits for some items had been getting more difficult since the beginning of the year, but they had now just stopped audit and certification processes, without explanation.

The Lithuanian Ministry of Foreign Affairs would not comment on China’s halts to trade, or the suspected reasons behind it.

It said in a statement that Lithuania was “determined to pursue mutually beneficial ties with Taiwan like many other countries in the European Union and the rest of the world do.”

“We hope that the recent issues in Lithuanian and Chinese relations will be resolved by diplomatic means based on mutual respect and international law,” it said.