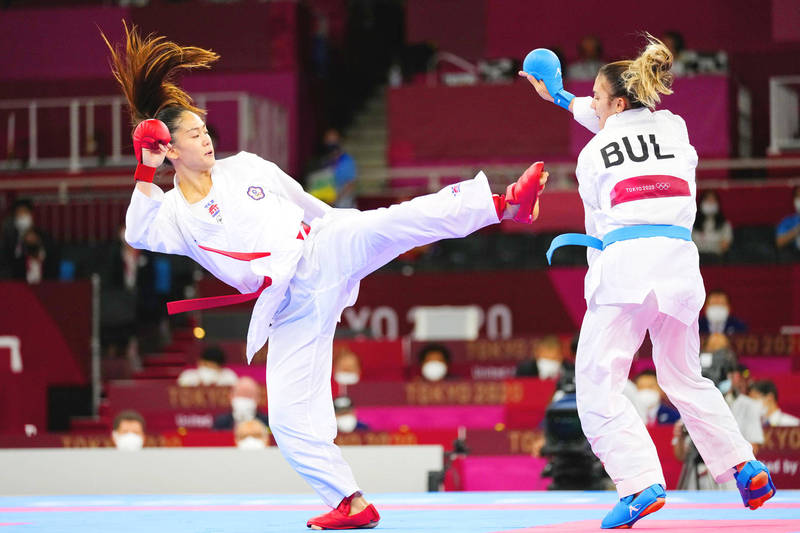 JUDGES’ DECISION: Wen and Anzhelika Terliuga had the same score, and a first-point rule did not apply, so a decision on who would advance went to the judges

World No. 3 Taiwanese karateka Wen Tzu-yun （文姿云） yesterday won a bronze medal in the women’s kumite 55kg category at the Tokyo Olympics, after falling to world No. 1 Anzhelika Terliuga in their semi-final.

Two minutes into the three-minute match, Wen and Terliuga each had one point, but Terliuga followed with a kick to Wen’s head eight seconds later, earning the Ukrainian three points.

With just one second on the clock, Wen landed a kick on Terliuga’s head, tying the score at 4-4.

Olympic karate rules for ties say that the competitor who scored the first point is the winner.

However, as Wen and Terliuga were awarded their first point at the same time, the winner was determined by the judges, with Terliuga emerging victorious.

Despite the loss, Wen won bronze because in Olympic kumite, the athletes defeated in the semi-finals do not fight.

Bulgaria’s Ivet Goranova, who Wen lost to in their Group A bout, defeated Terliuga to win the gold.

Wen beat Sara Bahmanyar of Iran and Serap Ozcelik Arapoglu of Turkey in her other group matches.

A few years ago, she had seen Wen exert herself and shine at the Asian Games, Tsai wrote, adding that she also met Wen several times on visits to the National Sports Training Center in Kaohsiung.

“We are all proud of you,” Tsai wrote.

Anzhelika Terliuga of Ukraine reacts after her karate win against Wen Tzu-yun of Taiwan in the women’s under-55kg kumite semi-finals at the Tokyo Olympics yesterday. Photo: AP