《TAIPEI TIMES》 Taiwan thanks US as arms approved 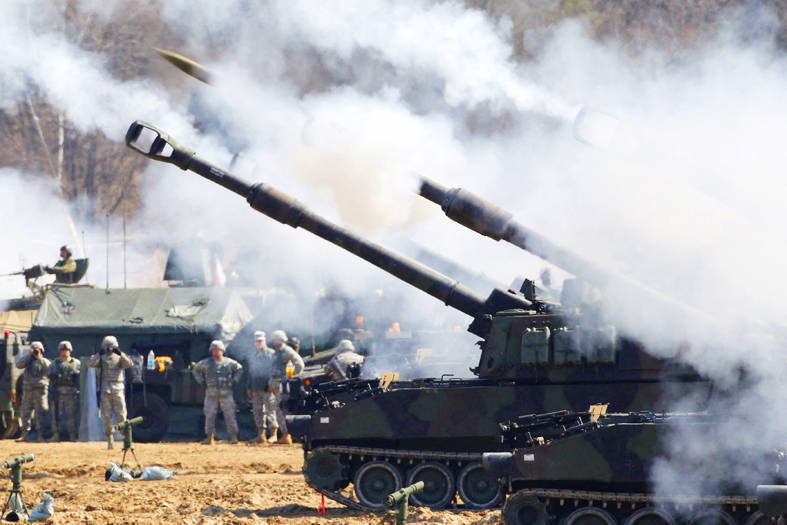 US Army M109A6 Paladin self-propelled howitzers fire at a drill at the Rodriguez range in Pocheon, South Korea, on March 15, 2012. Photo: AFP

FIRST FROM BIDEN: The package demonstrates the US government’s high regard for Taiwan’s defense capabilities, the Presidential Office said, while Beijing fumed

The Presidential Office yesterday thanked Washington after the US Department of State approved the sale of 40 Paladin M109A6 self-propelled howitzers and related equipment to Taiwan, the first such deal since US President Joe Biden took office in January.

With the sale, the US is honoring its commitment to furnish Taiwan with defensive articles under the US’ Taiwan Relations Act and the “six assurances,” Presidential Office spokesperson Xavier Chang （張惇涵） said while expressing the government’s “sincere gratitude” for the deal.

The US Department of Defense’s Defense Security Cooperation Agency said in a statement that it notified Congress on Wednesday of the US$750 million deal.

The sale would “contribute to the modernization of the recipient’s self-propelled howitzer fleet, enhancing its ability to meet current and future threats ... while further enhancing interoperability with the United States and other allies,” it said.

The package marks the first US arms sale to Taiwan under the Biden administration, “fully demonstrating the US government’s high regard for Taiwan’s defense capabilities,” Chang said.

The Ministry of Foreign Affairs yesterday confirmed receipt of official notice from Washington about the package.

The US has continued its policy of normalizing arms sales to Taiwan in recent years, helping the nation to acquire defensive equipment in a timely manner, the ministry said.

Despite Chinese aggression, Taiwan would continue to improve its defensive capabilities to safeguard the lives and property of Taiwanese, and their democratic way of life, it said.

Through close cooperation with the US, the nation would maintain peace in the Taiwan Strait and keep contributing to the long-term peace, stability and prosperity of the Indo-Pacific region, it said.

The package is likely to be formally confirmed by Congress after a month, the Ministry of National Defense said in a statement, thanking Washington for the agreement that would help “enhance the rapid response and fire support capabilities of our ground forces.”

Separately, the Chinese Ministry of Foreign Affairs said it has lodged stern representations with the US while promising to take appropriate countermeasures.

The agreement interferes in internal Chinese affairs and “sends a wrong message to Taiwan independence secessionist forces” in contravention of international law and norms, it said.

The Chinese ministry also urged Washington to abide by the “one China” principle and the Three Joint Communiques, and to immediately cease all military cooperation with Taiwan to “avoid further damaging China-US relations, and peace and stability in the Taiwan Strait.”