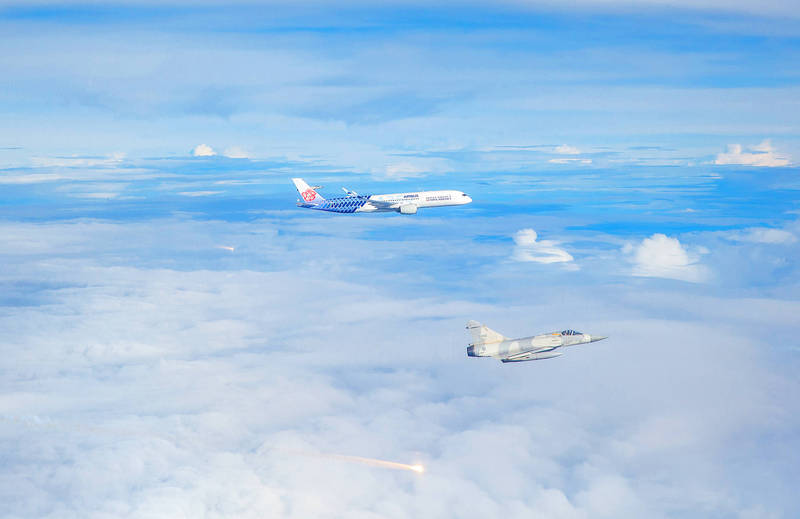 Republic of China Air Force Mirage 2000 jets yesterday release flares as they fly on either side of a China Airlines Airbus carrying athletes back to Taiwan from the Tokyo Olympics. Photo: Military News Agency via CNA

The military yesterday dispatched four fighter jets to welcome a group of Olympians back to Taiwan to thank the nation’s athletes competing in this year’s record-breaking Tokyo Games.

Taiwan this year has posted its best-ever Olympic result with 11 total medals thus far — two golds, four silvers and five bronzes — more than doubling its previous record of five medals in 2000 and 2004.

To celebrate the achievement, the Ministry of National Defense said it was instructed by President Tsai Ing-wen （蔡英文） to dispatch four Mirage 2000 jets to escort the athletes flying home on a China Airlines charter flight.

On the new Airbus A350 plane were gold medal winners Lee Yang （李洋） and Wang Chi-lin （王齊麟）, who on Saturday bested China in the men’s doubles badminton final, and Tai Tzu-ying （戴資穎）, who on Sunday took silver in the women’s badminton singles.

Also on the flight were fellow badminton players world No. 4 Chou Tien-chen （周天成） and world No. 11 Wang Tzu-wei （王子維）, as well as coaches and support staff.

The four Mirage jets took off from Hsinchu Air Base to meet the athletes’ flight in the air before it touched down at 5:11pm.

The jets also set off a series of flares on either side of the plane for the athletes to enjoy, which were captured by Wang Chi-lin, Wang Tzu-wei and Tai in their Instagram stories.

“It is our great honor to welcome back these national heroes,” the ministry said, adding that the gesture was intended to thank all the athletes representing Taiwan at the Games, as well as show government and public support for sports.

The ministry made a similar gesture in 2018, when F-16 jets were dispatched to escort and set off flares for Taiwan’s athletes returning from the Jakarta Palembang Asian Games.

It also follows a wish voiced by the president as early as 2019 to welcome the nation’s athletes back from the Tokyo Olympics with an F-16 escort.

Representatives from the Sports Administration and Chinese Taipei Olympic Committee, as well as China Airlines and EVA Airways staff, also lined up to welcome the badminton team at Taiwan Taoyuan International Airport with banners and cheers.