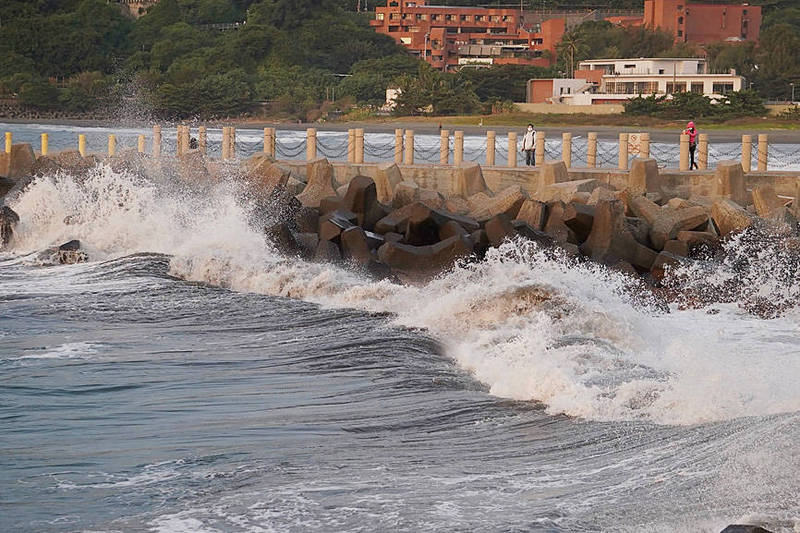 People watch as waves break against a pier in Kaohsiung yesterday. Photo: CNA

The Central Weather Bureau yesterday issued a sea alert for Tropical Storm Lupit as it approached the Taiwan Strait.

As of 8:30pm, Lupit was centered at about 480km west of Oluanpi （鵝鑾鼻） and was headed northeast at 13kph.

The storm — which had a radius of 60km — had maximum sustained winds of 65kph near the center.

Lupit is forecast to make landfall in China’s Fujian or Guangdong provinces at about noon today, Liu said, adding that Taiwan would be out of its area of influence from Sunday after it moves northeast from Fujian.

As the storm’s projected path is expected to affect the nation’s outlying islands, the bureau might issue a land alert this afternoon for Kinmen, Lienchiang （Matsu） and Penghu counties.

Lupit might be downgraded to a tropical depression after it makes landfall in China, Liu said.

“Whether Lupit remains a tropical storm or weakens to a tropical depression system after landfall, it would continue to affect the Taiwan Strait through Saturday,” he said.

Lupit is characterized by strong convective cloud systems, with most of them south of the storm’s center, Liu said.

As it moves north, it is expected to bring strong southwesterly wind and high humidity, which could lead to heavy to extremely heavy rainfall in central and southern Taiwan, he said.

Strong wind and swells of up to 4m are expected in Penghu, Kinmen and Lienchiang, he said, adding that waves in northern and eastern areas of Taiwan proper might be 1m to 2m.

Rain in the north and northeast is expected to ease today, but continue in southern Taiwan, Liu added.

Meanwhile, another tropical depression off the nation’s northeast coast might be upgraded to a tropical storm today, which would be named Mirinae.

The weather system is forecast to head toward Japan and not affect Taiwan directly, bureau forecaster Liu Pei-teng （劉沛滕） said.

Both storms are guided by a weak airstream, making Fujiwara effects unlikely, Liu said, referring to the phenomena when nearby storms are drawn into a circle around a common center.