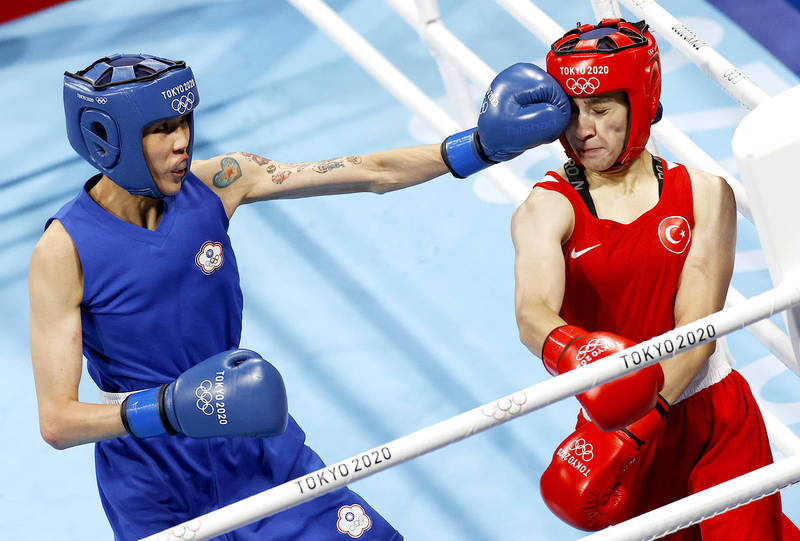 DEBUT NERVES? Huang Hsiao-wen said that she was honored to represent her nation, but added that nerves had got to her and her opponent was more composed

Taiwanese boxer Huang Hsiao-wen （黃筱雯） yesterday won bronze in the flyweight category at the Tokyo Olympics, the first medal Taiwan has ever won in the sport, after falling to world No. 2 Buse Naz Cakiroglu of Turkey in the semi-finals.

Huang, who is competing at the Olympics for the first time, lost 0-5 to Cakiroglu.

Despite the defeat, she won a medal because athletes who are defeated in a boxing semi-final at the Olympics are all awarded bronzes, unlike other Olympic sports in which losing semi-finalists vie for a single medal.

European champion Cakiroglu saw off the 1.76m Huang with a high-tempo, tactical performance, ducking Huang’s long jabs repeatedly before moving in swiftly on the counter.

Huang was visibly emotional after the bout, telling reporters how much the medal means to her and that she feels “extremely honored.”

Huang was outscored in all three rounds.

“I was too nervous,” Huang said. “Even though [Cakiroglu] is shorter, she exuded more confidence.”

Huang’s coach, Liu Tsung-tai （劉宗泰）, said that his charge was not able to control her speed as well as her opponent, but he was still proud of her performance at her first Summer Games.

It has been tough for Huang to maintain her competition weight of 48kg to 51kg and he wants her to have some time off after returning to Taiwan, Liu said.

“And then we’ll start over,” he added.

Huang began crying again on hearing Liu’s words, saying that the medal is meaningful to her, being a first for Taiwan.

“I feel extremely honored to be able to bring this glory to Taiwan,” she said.

Cakiroglu is to fight 35-year-old Stoyka Zhelyazkova Krasteva of Bulgaria in Saturday’s flyweight gold medal match after she emerged on top despite a spirited performance by Japan’s Tsukimi Namiki.

“I am so, so happy, but I am trying to stay focused on the final as we came here ... to win the gold medal,” Cakiroglu said. “The mission is not complete yet.”