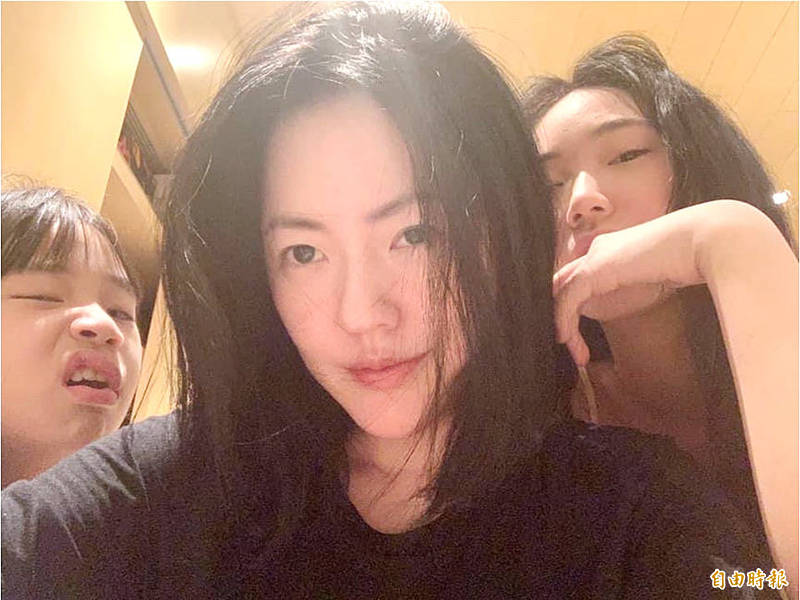 Entertainer Little S, center, and her daughters are pictured in an undated photograph taken from her Instagram account. Photo copied by Chen Hui-ling, Taipei Times

HOUNDED ONLINE: Two Chinese firms said they would not extend their contracts with Little S, while another terminated its agreement following an Instagram post

A high-profile Taiwanese TV host found herself the latest to draw fire from Chinese Internet users after referring to Taiwan’s Olympians as “national competitors.”

Dee Hsu （徐熙娣） — better known as “Little S” — made the comment in an Instagram post on Sunday during the women’s singles badminton final between Tai Tzu-ying （戴資穎） of Taiwan and Chen Yufei （陳雨菲） of China.

The post drew an angry reaction in China, where nationalist Internet users often police the comments of celebrities and companies for views that clash with the Chinese Communist Party’s official narrative that both sides of the Taiwan Strait are part of “one China.”

“Hsu’s Ins” — short for Hsu’s Instagram — quickly became one of the most-searched topics on Sina Weibo on Monday, garnering more than 480 million views as of yesterday.

“Just stay in Taiwan. That way you don’t need to work so hard at being two-faced,” one online commentator said.

A representative for Hsu, who started out as a singer in the 1990s before becoming one of Taiwan’s most high-profile talk show hosts, could not immediately be reached for comment. The Instagram comment that drew outrage has since been deleted.

Most Taiwanese celebrities are careful never to reveal their stance on Taiwan’s political status for fear of being locked out of the lucrative Chinese market or angering fans at home who identify as Taiwanese rather than Chinese.

Hsu was unusual in celebrity circles for being outspoken in her support for former president Ma Ying-jeou （馬英九） of the Chinese Nationalist Party （KMT）.

Last year, she was highly critical of the government’s decision to ban exports of medical masks in the early stages of the COVID-19 pandemic, saying they were more urgently needed “in China.”

In the past few years, Hsu has spent an increasing amount of time across the Strait building her brand.

Several companies that sponsor Hsu, including Unilever and sex-toy maker Osuga, have sought to distance themselves from Hsu, saying they would not extend contracts with her, according to the United Daily News and other local media.

Oriental House, a Ningbo, China-based maker of traditional medicinal teas, said it had canceled its contract with Hsu after her Instagram post.

“The nation’s interests are more important than anything else,” it said in a Sina Weibo post. “Resolutely support the one China principle.”

Taiwanese singer Jolin Tsai （蔡依林） was also targeted on Monday after congratulating several of Taiwan’s athletes at the Olympics, with angry Chinese Internet users asking why she had failed to celebrate any Chinese competitors.

Those outside China have found themselves targeted by Chinese state media and Internet users as Chinese President Xi Jinping （習近平） encourages the country to challenge those seen as trying to split or weaken it.

The threat of losing market share in the world’s most populous country has prompted sports leagues, airlines and other multinationals to edit perceived political slights.

“I asked at the wrong time. Should have been more careful of my words,” Furukawa said, after deleting the original post.