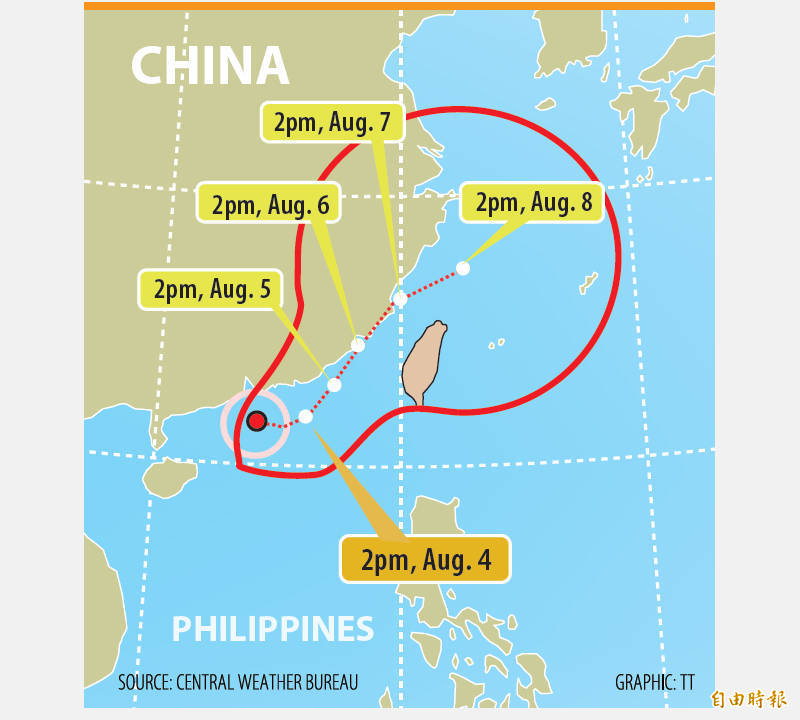 A tropical depression near China’s Guangdong Province is expected to be upgraded to a tropical storm, the Central Weather Bureau said yesterday, adding that it would begin affecting Taiwan’s outlying islands tomorrow.

The expected tropical storm would be named Lupit, which means “cruelty” in Filipino.

Based on data collected by the bureau and other meteorological agencies, the tropical depression is likely to be upgraded to a tropical storm by today, weather forecast center specialist Wu Wan-hua （伍婉華） said, adding that it is expected to move east before turning north.

The tropical storm would be in the Taiwan Strait from tomorrow to Saturday, bringing heavy rain and strong winds to Penghu, Kinmen and Matsu, Wu said.

The system would cause the southwest wind to continue to be the dominant force affecting the weather in Taiwan, bringing showers and thundershowers to central and southern areas, she said.

“Residents in central and southern regions should beware of damage caused by short bursts of intense rainfall, and chances for heavy or extremely heavy rainfall are also high,” Wu said. “Intermittent to heavy rain is forecast for northern and eastern regions.”

A large low-pressure system is hovering in the northwest Pacific Ocean, making it easier for tropical systems to develop, she said, adding that the bureau has also identified low-pressure areas in the East China Sea, and off the northern and eastern coasts of Taiwan.

The bureau would closely monitor the subsequent development of these low-pressure areas, as they could affect the weather in Taiwan, she added.