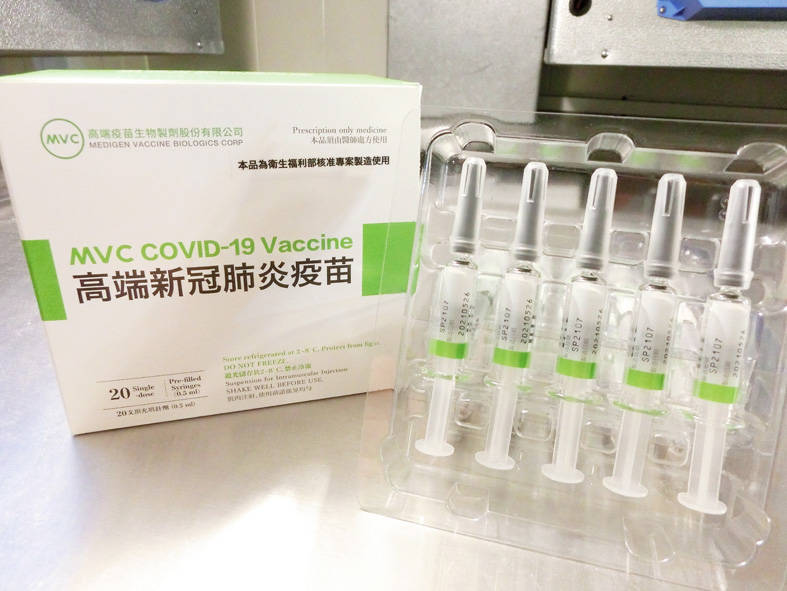 Syringes of Medigen Vaccine Biologics Corp’s MVC COVID-19 vaccine are pictured in an undated photograph. Photo courtesy of the Food and Drug Administration

MEDIGEN: The Central Epidemic Command Center plans to wait until about 500,000 to 600,000 doses have passed testing before offering it in the vaccination program

The inspection of the first four batches of the domestic COVID-19 vaccine has been completed and the doses are ready to be rolled out, the Food and Drug Administration （FDA） said yesterday.

The inspection of the four batches of the vaccine made by Medigen Vaccine Biologics Corp （高端疫苗）, a total of 265,528 doses, was completed on Friday last week and they are being sealed at a designated warehouse in preparation for use, FDA Research and Inspection Division head Wang Teh-yuan （王德原） said.

The sealing was expected to be completed yesterday evening, he said.

The Medigen vaccine, the first protein-based COVID-19 vaccine to be made available in Taiwan, would be good for six months before they expire, he added.

Medigen secured an emergency use authorization （EUA） for the vaccine from the FDA on July 19.

It took the FDA about one month to carry out the inspection of the first four batches of the protein-based vaccine, which is different from the spike-protein-based AstraZeneca vaccine and the mRNA-based Moderna vaccine previously received from overseas, Wang said, adding that the inspection took longer than the other two vaccines, including 21 days in animal testing to ensure its efficacy.

The Central Epidemic Command Center said that the Medigen vaccine would be offered in the national vaccination program when there is a sufficient number of doses.

Minister of Health and Welfare Chen Shih-chung （陳時中）, who heads the center, said it would be difficult to distribute the vaccine when there are so few doses available, adding that the center would wait until about 500,000 to 600,000 doses have passed testing before offering it in the program.

Asked whether the Medigen vaccine went into mass production and lot release testing before it received an EUA, Chen said that the EUA would not have been issued just because the product had gone into mass production, adding that when facing a pandemic, some vaccine development steps were conducted in parallel without increasing the risk for study participants to accelerate its development.

The center had requested that the Medigen vaccine go into mass production prior to the EUA review, Chen said, adding that according to the procurement agreement signed with the company, if the vaccine had failed to obtain an EUA then production costs would have been paid by the center.

Asked why the lot numbers of the four batches that passed testing were not sequential, Chen said that some of the batches still have problems that need to be solved, such as lacking the required technical information for review.

Meanwhile, Chen said that as the number of doses of the AstraZeneca vaccine is running short, the center plans to offer doses of the Moderna vaccine in the next round of bookings.

After 140,000 Moderna doses had been reserved for the second jabs of people in the top three priority groups, pregnant women and people aged 65 or older, there would be about 420,000 doses offered to other people who have registered on the national vaccination booking system, he said.

Eligible recipients of the Moderna vaccine in the next round would mainly be people in the ninth priority group of people who have a high-risk disease, a rare disease or catastrophic illness, he added.

There are about 880,000 people in the ninth priority group who only selected the Moderna vaccine, Chen said.