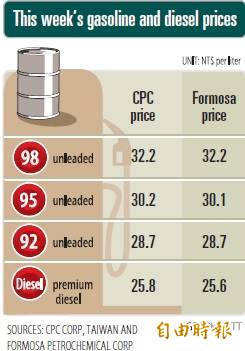 Diesel prices are to remain unchanged, after rising by NT$0.1 per liter last week, the two companies said.

Global crude oil prices continued to rise last week as the global economy is recovering and because of seasonal demand in the northern hemisphere, CPC said in a statement.

The IMF last week updated its World Economic Outlook forecast, saying that the global economy would expand 6 percent this year, with advanced economies likely to grow 5.6 percent, more than the 5.1 percent it forecast in April, while emerging markets and developing countries would grow 6.3 percent, down from the 6.7 percent increase it forecast in April.

Based on CPC’s floating oil price formula, gasoline and diesel prices should have risen by NT$0.4 and NT$1.1 per liter respectively, but to ease the financial burden on consumers amid a COVID-19 outbreak, it decided to absorb part of the cost increase, CPC said.

After the adjustment, gasoline prices at CPC stations would rise to NT$28.7, NT$30.2 and NT$32.2 per liter for 92, 95 and 98-octane unleaded gasoline respectively, while the price of premium diesel would remain at NT$25.8 per liter, the company said.

Global oil prices also rose last week due to a larger-than-expected decline in US crude oil inventories, and because talks on Iran’s nuclear program had stalled, Formosa said in a separate statement.

Prices at the company’s stations would increase to NT$28.7, NT$30.1 and NT$32.2 per liter for 92, 95 and 98-octane unleaded gasoline respectively, while the price of premium diesel would be unchanged at NT$25.6 per liter.

In other news, CPC is to keep liquefied petroleum gas （LPG） wholesale prices unchanged this month, the company said.

The prices of LPG products, such as household LPG, propane and butane, as well as propane-butane mixtures and automotive LPG, should have increased by NT$1.4 per kilogram from last month, but CPC said it would absorb the increase to help stabilize consumer prices.