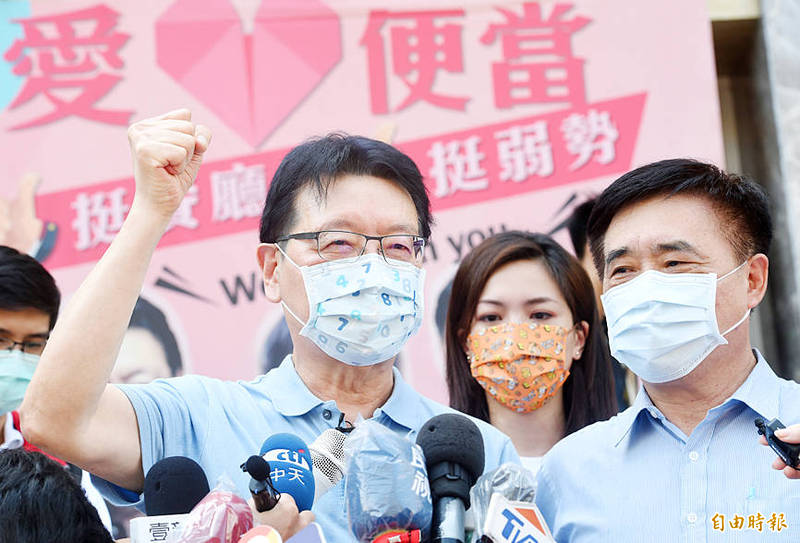 HASTY REVIEW CLAIMS: Medigen’s vaccine, which is to start phase 3 clinical trials later this year, should not have received emergency use authorization, Hau said

By Chen Yun and Jonathan Chin / Staff reporter, with staff writer and CNA

The administration on July 19 granted Medigen emergency use authorization, even though the drugmaker had not yet completed phase 3 clinical trials.

The government should not authorize the use of a vaccine that has not completed phase 3 trials, Hau said in Taipei on the sidelines of an event to distribute boxed meals with former president Ma Ying-jeou （馬英九） and Broadcasting Corp of China chairman Jaw Shaw-kong （趙少康）.

Hau said the government had politicized science in its hasty approval of a domestically developed COVID-19 vaccine.

The emergency use authorization of a vaccine prior to the completion of phase 3 trials is unprecedented, as it means a vaccine’s efficacy has not been verified, he said, adding that President Tsai Ing-wen （蔡英文） and Vice President William Lai （賴清德） have set a poor example in saying they would take the Medigen vaccine.

“The government should spare the lives of the Taiwanese people,” he said.

Minister of Health and Welfare Chen Shih-chung （陳時中）, who heads the Central Epidemic Command Center, yesterday said that the center respects the right of citizens to file petitions related to the authorization.

Medigen is the only Taiwanese company to which the FDA has granted emergency use authorization.

The administration said it based its decision on data Medigen obtained in a phase 2 clinical trial of about 4,000 participants earlier this year, which was analyzed through immunobridging and compared with a control group of 200 recipients of the AstraZeneca COVID-19 vaccine in Taoyuan.

Immunobridging is a method to infer the efficacy of a vaccine by comparing the concentration of neutralizing antibodies in each group of recipients with that of an approved vaccine.

Medigen on July 20 announced that it had received permission to conduct a 1,000-person phase 3 clinical trial in Paraguay for its COVID-19 vaccine.

Participants in the trial, to be held with the National University of Asuncion’s medical school, would be recruited in the third quarter of this year and Medigen expects to have interim analysis data in the fourth quarter, the company said.

The trial would compare recipients of the Medigen and AstraZeneca vaccines through immunobridging, it said.

Medigen did not elaborate on its reasons for holding such a small trial or its use of immunobridging, which has been criticized as an insufficient substitute for traditional efficacy data.

Taiwan has agreed to buy 10 million doses of COVID-19 vaccines from two Taiwanese manufacturers: Medigen and United Biomedical, which has not yet been granted emergency use authorization by the FDA.