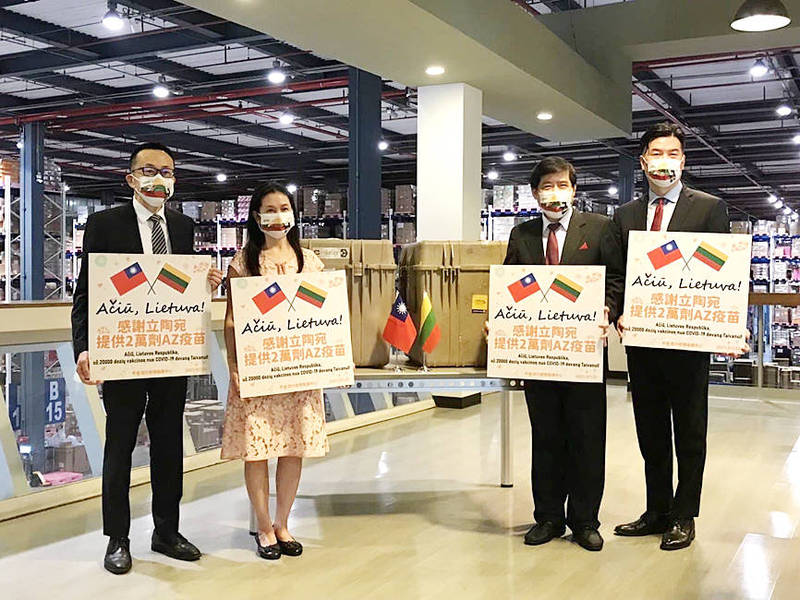 Minister of Health and Welfare Chen Shih-chung （陳時中）, who heads the center, said it is grateful to Lithuania for its donation and that the shipment arrived in Taiwan at about 10:30am yesterday.

He said more than 239,000 doses of COVID-19 vaccines were administered on Friday, adding that the vaccination coverage rate in Taiwan has reached 32.82 percent.

As the nation’s stock of the AstraZeneca vaccine has been running low and a few local governments have temporarily suspended vaccinations for a few days, the CECC was asked whether the next round of vaccinations would be postponed and whether local vaccine maker Medigen Vaccine Biologics Corp’s （高端疫苗） vaccine would be offered to the public.

The next round of vaccinations would still be held according to schedule, even though the supply of the AstraZeneca vaccine is relatively low, Chen said, adding that the Medigen vaccine would not be administered yet, and it might be offered after its production becomes more stable.

The CECC said the 11 local cases were five men and six women aged between 20 and 70 who developed symptoms from Friday last week to Friday.

Six of them tested positive during or upon ending isolation, Chen said, adding that the infection sources of seven cases have been identified, while two remain unclear and two are under investigation.

New Taipei City reported the most cases, with six, followed by Taipei with four and Chiayi County with one, Chen said.

“The number of daily reported cases with unknown infection sources has been below 10 for more than 20 days,” he said. “This is a good sign.”

Regarding a cluster infection reported on Friday among factory workers and their family members in Chiayi County’s Shueishang Township （水上）, Chen said the county government has set up several testing stations in local communities, and residents showed willingness to cooperate.

As of yesterday, nine workers at the factory and two of their family members tested positive for COVID-19.

Chen said the latest case in the cluster is a worker who first tested negative, but tested positive for antibodies against SARS-CoV-2.

The worker tested positive in a second test, he said, adding that the cluster has not expanded further beyond the factory.

Ninety-one close contacts of the cluster’s index case have been tested, and 10 among them tested positive on Friday and yesterday, while 62 tested negative, five were awaiting results and 14 were awaiting testing, CECC data showed.

The center also reported an imported case of COVID-19 — a Thai sailor who embarked on a boat in Thailand, and stopped in Russia and Indonesia before arriving in Taiwan.

Asked whether quarantine rules for overseas arrivals who have been fully vaccinated for at least 14 days could be eased like those for airline crew members, Chen said the center has considered the issue, but does not plan to ease the rules at this time.

He said there are a few instances of people who had received two doses of COVID-19 vaccine abroad testing positive upon returning to Taiwan, including a case infected with the Delta variant of SARS-CoV-2 reported on Friday.

Taiwan must remain vigilant to stop the Delta variant, which is more aggressive and transmissible than other variants, Chen said, adding that case counts in several countries with high vaccination coverage rates are rapidly increasing due to the Delta variant, so Taiwan must be very careful.