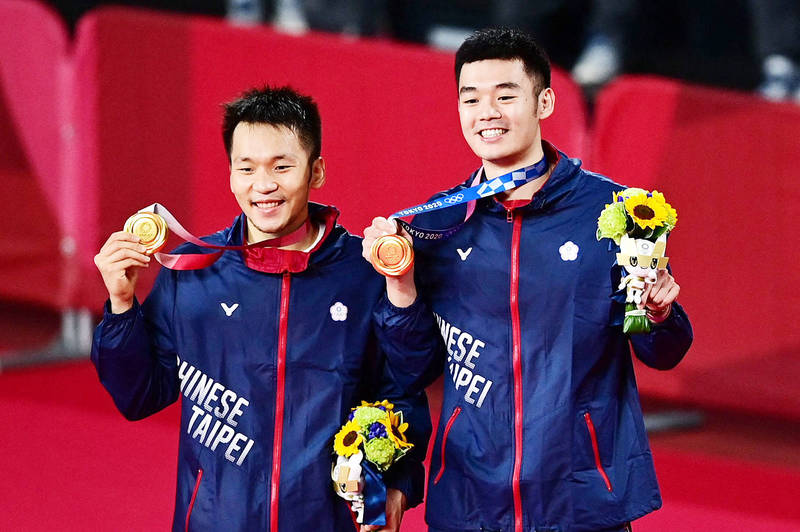 A TAIWAN FIRST: The duo are the first badminton players from Taiwan to climb an Olympic podium, and Tai Tzu-ying has a shot at doing the same today

Taiwanese badminton duo Lee Yang （李洋） and Wang Chi-lin （王齊麟） yesterday won the nation’s first Olympic gold medal in the sport when they prevailed over a third-seeded Chinese pair in the final of the men’s doubles at the Tokyo Olympics.

As of yesterday, Taiwan had bagged seven medals in Tokyo — two golds, two silvers and three bronzes — topping its previous best of five medals in 2000 and 2004.

Taiwan moved to No. 17 in the medals count on the Tokyo Olympics Web site.

China, Japan and the US placed first, second and third respectively.

In the first game, which world No. 1 Tai won 21-18 against Rio de Janeiro silver medalist and seventh-ranked Pusarla, the pair were evenly matched.

However, Tai picked up the pace in the second game, finishing Pusarla off 21-12 in 19 minutes.

“I reduced my mistakes and therefore didn’t have as much pressure on me,” Tai said, adding that she was not yet nervous about playing in today’s final against China’s second-ranked Chen Yufei （陳雨菲）, but probably would be just before the match.

“I need to go back and relax and prepare for tomorrow, because it’s not over yet,” Pusarla said, with her eye on bronze in a match against China’s He Bingjiao （何冰嬌）.

Earlier on Saturday, 34-year-old Kevin Cordon, who at age 12 moved from rural Zacapa in Guatemala to the capital city to pursue his dreams of reaching the Olympics, crushed South Korea’s Heo Kwang-hee 21-13, 21-18 to make the semi-finals.

Cordon, who ranks 59th in the world, has a shot at winning Guatemala’s second-ever Olympic medal.

“I play really hard with my heart. I don’t think, I just play,” said an exhilarated, red-eyed Cordon, who fell to the floor and curled up sobbing at the end of the match.

“It’s not easy for us as a country — there are more important things in Guatemala to support than sport,” said Cordon, who is named after England soccer great Kevin Keegan. “That’s our reality.”

Denmark’s Anders Antonsen was knocked out in the quarter-finals 21-18, 15-21, 21-18 by Anthony Sinisuka Ginting of Indonesia.