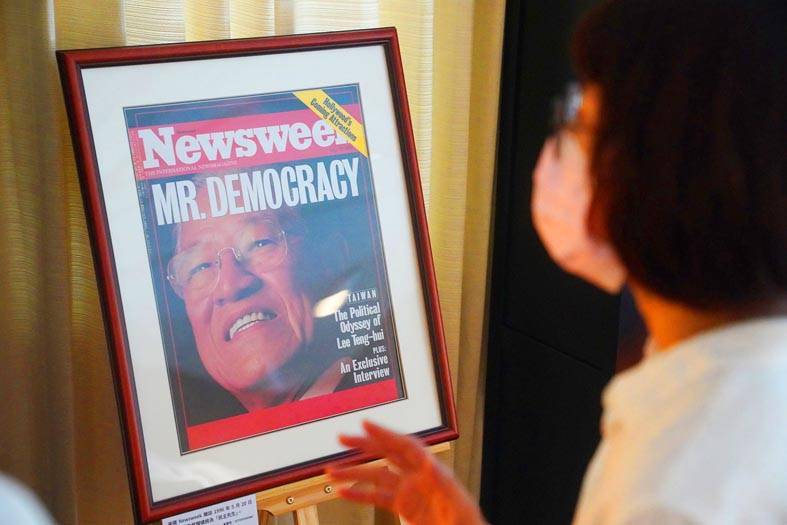 A woman yesterday looks at a display of a Newsweek cover from 1991 of former president Lee Teng-hui, with the headline “Mr Democracy,” at an exhibition at the National Museum of History to commemorate the anniversary of Lee’s passing. The exhibition opens today. Photo: CNA

On the eve of the first anniversary of the former president’s death, the foundation, the Taiwan Association of University Professors and other groups convened a news conference calling for the creation of a Lee Teng-hui memorial library.

Annie Lee （李安妮）, Lee Teng-hui’s daughter and chairwoman of the foundation, said her father was unable to fulfill his dream of building a library before he died.

After members of the funeral committee stressed the importance of creating a library in his honor, NTU agreed to the proposal, she said.

Annie Lee said that the first time she met NTU president Kuan Chung-ming （管中閔）, he gave his full support to the idea.

“At least we now have a location,” she said, adding that they would need government support.

After COVID-19 pandemic restrictions are eased, the foundation would exchange more ideas with the university, she added.

From the facility to its collection and future operations, everything requires meticulous planning, but, most importantly, it requires long-term, stable government support, he said, adding that the university is willing to participate fully with the project.

As NTU is a public institution, the process of loaning out property is subject to numerous regulations, but if an agency supports the idea and commissions the university to assist in establishing a library, this complication could be avoided, Ge said.

Without government support, it would be difficult to rely on the university or foundation alone for the enormous undertaking, including renovations, operating expenses, maintenance, curation and acquisitions, he added.

Annie Lee said her father’s unsaid last words were a wish for Taiwanese democracy to deepen and for its people to become more united.

“We cannot tear Taiwan and its people apart because of a memorial library,” she said.

Tsai and Vice President William Lai （賴清德） are to visit his grave this morning to pay their respects, he added.

Earlier, former Japanese prime minister Shinzo Abe told the Sankei Shimbun that he would also like to visit Taiwan to pay his respects to Lee Teng-hui, adding that no world leader ever thought more of Japan.

Whether speaking as leader of the foundation or as a family member, Annie Lee said they would do their best to make the visit a reality.

Considering Abe’s influence on Japanese politics and personal friendship with her father, Annie Lee said the foundation dearly hopes he can visit “no matter what.”

The timing is still being worked out, she said, adding that it does not necessarily need to happen on the anniversary of her father’s passing.