《TAIPEI TIMES》 Ministry thanks US secretary of defense for support 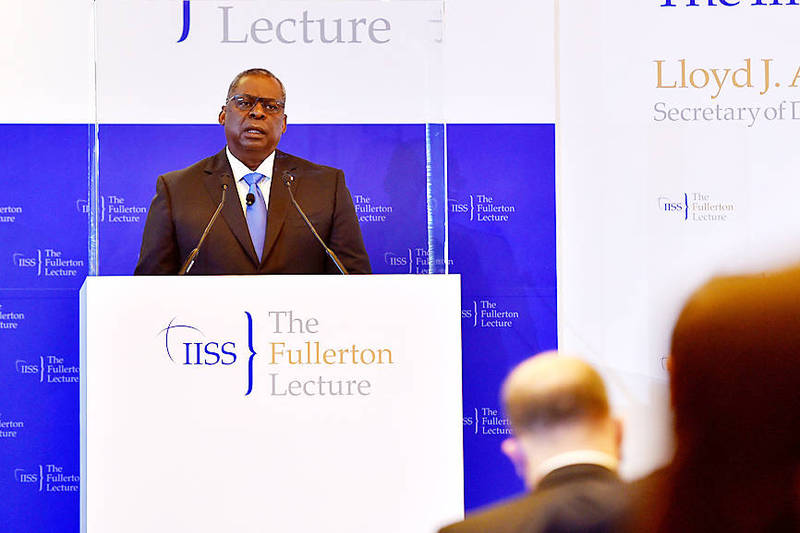 US Secretary of Defense Lloyd Austin speaks at the International Institute for Strategic Studies Fullerton Lecture in Singapore on Tuesday. Photo: Reuters

The Ministry of Foreign Affairs has expressed its gratitude for comments by US Secretary of Defense Lloyd Austin in a speech in Singapore on Tuesday that reiterated Washington’s commitment to Taiwan’s security.

Austin delivered the speech, titled “The imperative of partnership,” at the 40th Fullerton Lecture, which was hosted by the UK International Institute for Strategic Studies.

“I’ve come to Southeast Asia to deepen America’s bonds with the allies and partners on whom our common security depends... And I never take an ally for granted,” Austin said.

The most urgent task is to recover from the COVID-19 pandemic, he said, adding that a global recovery requires global vaccination.

The Indo-Pacific region was made a top priority in US President Joe Biden’s plan to deliver more than 500 million COVID-19 vaccine doses worldwide, he said, adding that over the past two months, the US has donated about 40 million doses in the region, including to Taiwan, Indonesia, Laos, Malaysia, the Philippines, South Korea, Thailand and Vietnam, he said.

With new threats and technologies changing the face and pace of warfare, the US, along with its allies and partners, is operating under a new vision called “integrated deterrence,” which included the so-called “gray zone,” where the rights and livelihoods of Southeast Asians are coming under stress, he said.

“Meanwhile, we are working with Taiwan to enhance its own capabilities and to increase its readiness to deter threats and coercion, upholding our commitments under the [US’] Taiwan Relations Act, and consistent with our one China policy,” he added.

Beijing’s claim to the vast majority of the South China Sea has no basis in international law, Austin said.

“We have also seen [Beijing’s] aggression against India, destabilizing military activity and other forms of coercion against the people of Taiwan, and genocide and crimes against humanity against Uighur Muslims in Xinjiang,” he said.

“We will not flinch when our interests are threatened. Yet we do not seek confrontation,” Austin said.

“As secretary, I am committed to pursuing a constructive, stable relationship with China, including stronger crisis communications with the [Chinese] People’s Liberation Army,” he said. “You know, big powers need to model transparency and communication — and we hope that we can work together with Beijing on common challenges, especially the threat of climate change.”

In Taipei, Ministry of Foreign Affairs spokeswoman Joanne Ou （歐江安） thanked Austin for reiterating Washington’s commitment to Taiwan’s security, as well as thanking the Biden administration for donating 2.5 million doses of the Moderna vaccine to Taiwan.

The Biden administration has repeatedly said that its commitment to Taiwan is “rock solid” under the Taiwan Relations Act and the “six assurances,” while engaging with its allies to underscore the importance of peace and stability across the Taiwan Strait, Ou said.

As a close partner of the US in the Indo-Pacific region, the nation would continue to boost its defense capabilities, and contribute to peace and stability across the Strait and the region, she said.