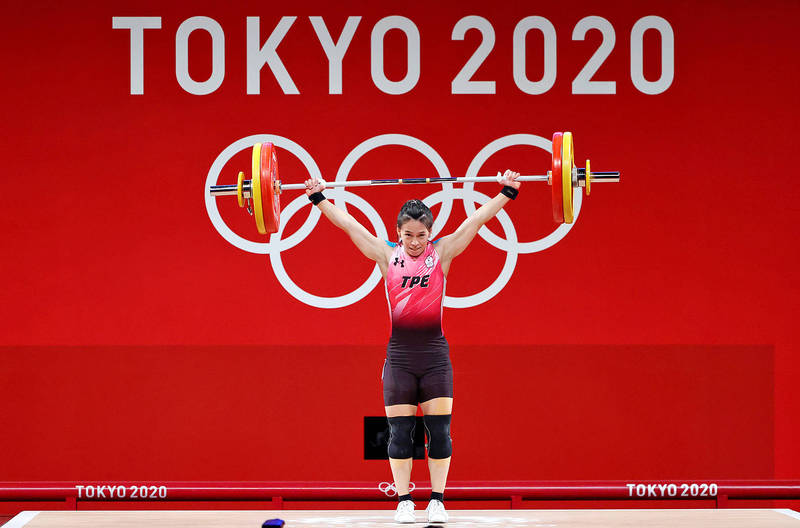 BREAKING RECORDS: Kuo Hsing-chun’s snatch, clean and jerk, and combined lifts were all Olympic records, although well off her combined world record

Kuo, who has not lost a major competition in her weight class since the 2016 Olympics in Rio de Janeiro, where she was hampered by injury and finished third, finally chased down the gold medal that had long remained just out of her grasp.

The 27-year-old finished with a combined lift of 236kg — 103kg in the snatch and 133kg in the clean and jerk — 21kg more than runner-up Polina Guryeva of Turkmenistan.

Kuo’s snatch, clean and jerk, and combined lifts were all Olympic records, but well off her combined world record of 247kg on a day when winning gold was the main order of business.

She dropped to the floor with a bitter smile after failing at a lift of 141kg in the clean and jerk to break her record of 140kg.

“I was competing against myself, and I wanted to break the world record,” Kuo said.

“I am very happy that I put all the pieces together now, adding in the Olympic gold medal today,” she said.

Andoh burst into tears on the stage after her final attempt at the clean and jerk and was helped up by two coaches.

The Japanese lifter said she injured her knee this month by dropping a barbell when she was practicing.

“I thought that was the end of it when that happened,” Andoh said. “I was not able to do the clean and jerk until I got here today.”

She was beaten by Canada’s Maude Charron, who took gold with a combined lift of 236kg, and Italy’s Giorgia Bordignon, who lifted 232kg.

It was Chen’s first Olympic appearance after wining three gold medals at the Asian Weightlifting Championships in Uzbekistan earlier this year and later securing a berth at the Tokyo Olympics.

Taiwan now has had one gold, two silver and three bronze medals in Tokyo.

From left, silver medalist Giorgia Bordignon of Italy, gold medalist Maude Charron of Canada and bronze medalist Chen Wen-huei of Taiwan pose on the podium at the victory ceremony of the women’s under-64kg weightlifting competition at the Tokyo 2020 Olympic Games yesterday. Photo: AFP