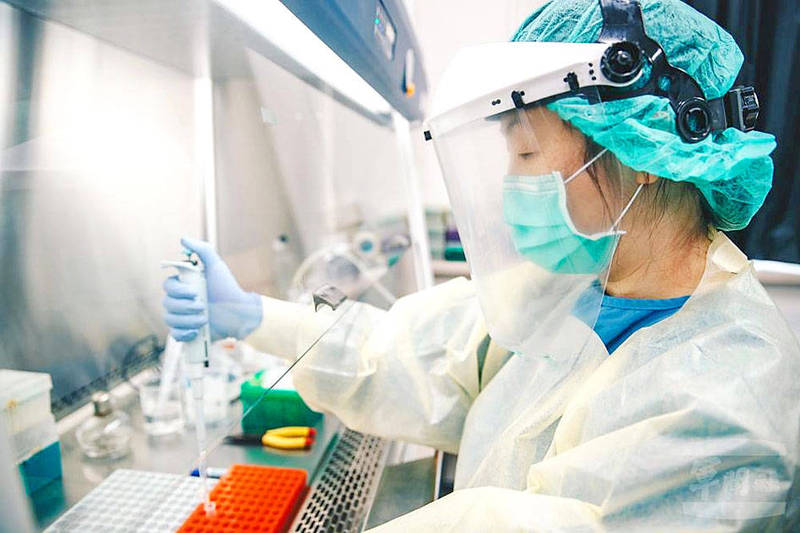 VACCINATIONS: Minister of Health and Welfare Chen Shih-chung said that people aged 18 or older can now register, while more than 8.87 million people have so far

A domestic COVID-19 vaccine was included as an option for people aged 20 or older when the national online vaccination booking system was reopened yesterday, the Central Epidemic Command Center （CECC） said yesterday.

The vaccination booking system had been closed since the end of the previous registration period at 12pm on Monday last week.

The system was reopened from 2pm yesterday so that people aged 18 or older who have yet to register could do so, said Minister of Health and Welfare Chen Shih-chung （陳時中）, who heads the center.

The government on Monday last week granted the COVID-19 vaccine of local drugmaker Medigen Vaccine Biologics emergency use authorization, so it was added as a vaccine choice in the booking system for people aged 20 or older, Chen said.

Anyone who has registered online, but goes back and selects the AstraZeneca vaccine would now need to wait until the 4.95 million people who selected the vaccine during the previous registration period get a second shot, Chen said.

While the Advisory Committee on Immunization Practices has agreed to allow people to receive different vaccine brands, with AstraZeneca as the first dose and an mRNA vaccine as the second, the practice has yet to be implemented, he said.

At 3:14pm yesterday, 582,000 doses of the AstraZeneca vaccine arrived in Taiwan.

Chen said the shipment was the fourth batch of a contract for 10 million doses that the government signed with the company on Oct. 30 last year.

As the AstraZeneca shot was the only vaccine during the first four weeks of the booking system, the center was asked when people who had only selected the Moderna vaccine would get vaccinated.

There would be enough doses for about 4 million people to get the Moderna shot, while more than 2.9 million Moderna doses have been administered, so a limited number of the shots are to be offered, Chen added.

Among those who registered on the booking system before noon on Monday last week, about 3.9 million people had only selected the Moderna vaccine.