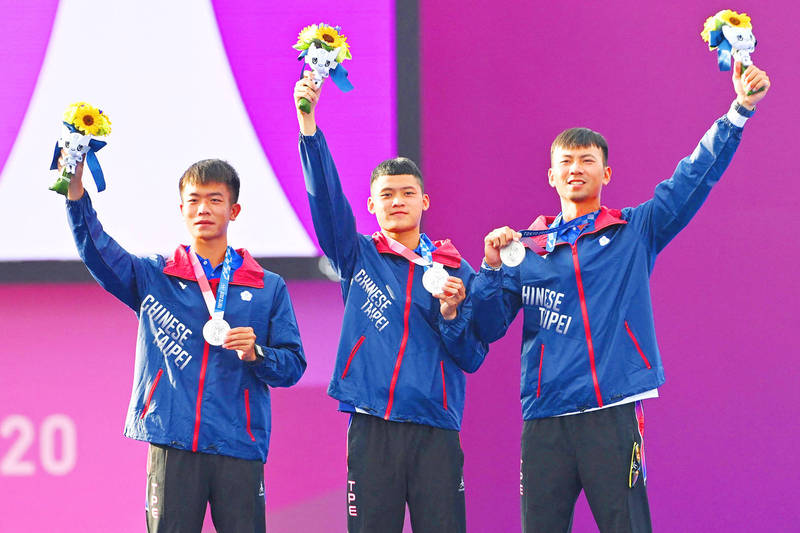 Taiwan’s men’s archery team yesterday bagged a silver medal after being beaten by South Korea in the gold medal match at the Olympic Games in Tokyo.

Taiwan’s Tang Chih-chun （湯智鈞）, Wei Chun-heng （魏均珩） and Deng Yu-cheng （鄧宇成） posted respectable scores, including six 10s from 18 arrows, but respectable was not enough in a final in which South Korea were at their dominant best.

It was the fifth gold medal for South Korea’s men in the team event at the past six Olympic Games.

The silver was the fourth medal Taiwan’s archers have won at an Olympic Games.

After matching Taiwan’s best finish ever in Athens in 2004, Wei remained humble, telling reporters that the team still had much to learn and improve on.

Tang admitted that he was so nervous before the gold medal match that he was shaking badly when he walked into the venue.

“Of course, I wish to have had a better result, [but] I’m quite satisfied,” Deng said.

Their coach, Liu Chan-ming （劉展明）, attributed the silver medal to the efforts of the entire Olympic archery squad, including the women’s archery team that was ousted in the opening round a day earlier, for sharing tips on the venue.

In the team archery competition, the teams compete in games of six arrows, with each of the three team members firing two arrows. Winning a game earns two points and a tie is worth one point, with the first team to garner five points winning the match.

Taiwan advanced to the gold medal match after eliminating Australia in a shoot-off in the opening round, before topping China 5-1 in the quarter-finals earlier yesterday.

The archers then completed a three-game 6-0 whitewash of the Netherlands with five 10s out of six in the semi-finals to give themselves a shot at Olympic gold for the first time in 17 years.

Wei, Tang and Deng were likely hoping that momentum would carry over to the final, but when South Korea opened with a 59 in the first frame （five 10s and a 9） to Taiwan’s 55 and a perfect 60 in the second game to Taiwan’s 58, it was clear South Korea were headed for gold.