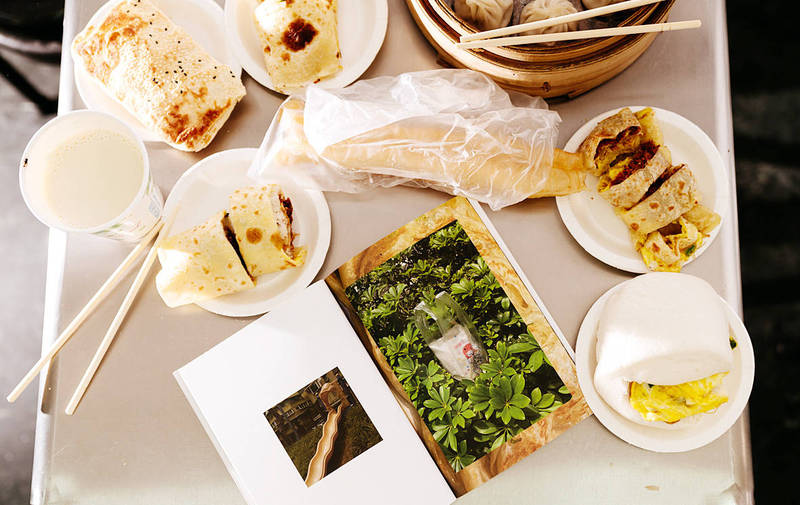 Unlike bubble tea, which has risen to the status of possibly Taiwan’s most famous export, local breakfast staples like savory, egg pancakes （danbing, 蛋餅） have had less success making it into the US dining mainstream.

Young, a designer who spent about a decade living in Taiwan, told the Taipei Times in an e-mail interview last week that the more she spoke with others about breakfast in Taiwan, where members of her family still live, the more she realized that she knew little about it.

She traveled across the nation with her father for 17 days in January, fueled by a desire to research the local breakfast scene — at length and at first hand.

Breakfast Shop, which was published late last month, is the product of that delicious pilgrimage and a love letter to Taiwanese breakfast food and culture.

With uncaptioned photographs shot with her iPhone, Young presents a sentimental view of the quintessential Taiwanese breakfast experience in her self-published work.

While food takes center stage in the photo book, Young dedicates nearly as much space to capturing a relaxed early morning mood.

Turning her lens away from the plates, she documents sights like the sculpted roof of a temple, typical in Taiwanese residential areas, or a mosaic tiled floor reminiscent of Taiwanese architecture of the middle of last century.

The fragrant scent of the griddle at a neighborhood shop draws customers into what she described as a community where “people start their days and end their nights.”

To an unfamiliar eye, the pictures collected in the red and white-covered zine seem like they could come from any local breakfast joint.

However, Young said that each region has a unique take on breakfast.

In northern Taiwan, where convenience is king, food options are designed for people to “pick up and go,” she said.

Southern residents might take more time to sit down and enjoy a bowl of soup or porridge, while Aborigines in the east incorporate fresh, locally sourced produce, she said.

Young’s search for what she called “beauty in the ordinary and the unnoticed” is also visible in her decision to zoom in on objects like an old-fashioned textured window and red rubber bands used by shops to close takeout boxes.

The faces pictured in Breakfast Shop, whose masks reveal the reality of the pandemic, are those of anonymous strangers, but the zine is not the visual diary of an impassive tourist.

Young, who fondly remembers buying breakfast before class as a child in Taiwan, included a photo of her grandmother’s home in Taipei.

On Instagram, she has created the “breakfast__shop” account, which is meant to be a digital extension to Breakfast Shop.

There, she also advertises branded T-shirts she made in collaboration with a friend, Taiwanese artist Chou Yi （周依）.

The vision for Breakfast Shop, which Young understands as an ongoing project, was to recognize the everyday as art, she said.

“It was soul crushing to see what was happening from afar,” she said of the escalating anti-Asian violence in the US, which began during her stay in Taiwan.

“Now is the time to spread more love,” she said.