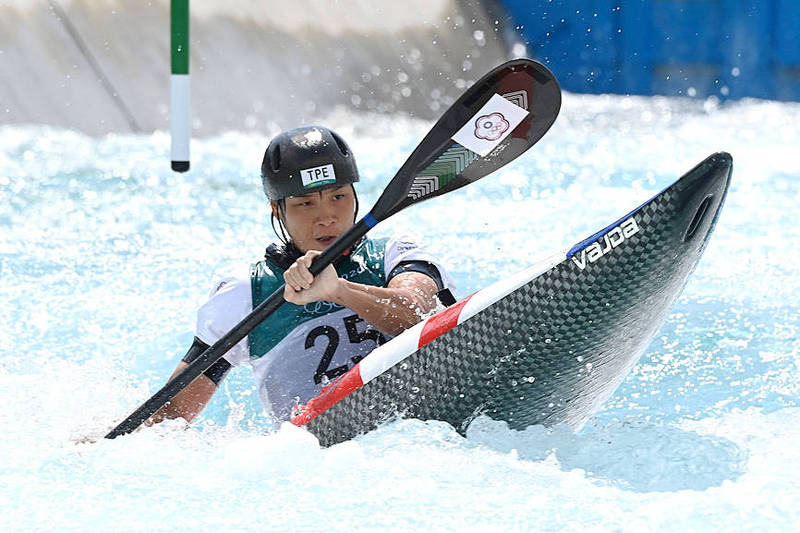 Germany yesterday bested Taiwan in the opening round of women’s archery at the Tokyo Olympics, dashing the team’s hopes for a repeat of its bronze-medal-winning performance at the 2016 Rio Olympics.

Taiwan lost 2-6 to Germany, winning only one of their four sets.

The trio also represented Taiwan at the 2012 Olympics in London, where they were knocked out in the quarter-finals after losing to Russia, who are this year competing under the flag of the Russian Olympic Committee as part of sanctions for several doping scandals.

“We knew Chinese Taipei [Taiwan] was a strong opponent, but we were also strong. We have positive energy and we did it,” said German archer Lisa Unruh, a Rio silver medalist.

Germany went on to defeat Belarus for the bronze medal, while South Korea overcame the Russians 6-0 for their ninth straight gold in Olympic women’s archery.

Taiwan’s men’s archery team face Australia today, while Lei and Tan compete in the women’s singles tomorrow, along with Wei Chun-heng and Tang Chih-chun in the men’s singles.

In table tennis, Lin Yun-ju and Cheng I-ching lost 4-1 to the Japanese duo of Jun Mizutani and Mima Ito in the mixed doubles semi-finals.

In the second round of the men’s singles in table tennis, Chuang Chih-yuan beat Argentina’s Horacio Cifuentes 4-3.

In badminton, world No. 4 Chou Tien-chen of Taiwan beat Sweden’s Felix Burestedt 21-12, 21-11 in his first win in the group stage of the men’s singles.

This is the second time the 31-year-old Chou has made it to the Olympics after reaching the quarter-finals in Rio in 2016.

Wu scored 573 points in six rounds of shooting within 75 minutes, while Tien — a silver medalist in the event at the 2014 Asian Games in Incheon, South Korea — earned 559 points.

At the sun-baked Kasai Canoe Slalom Centre, Chang Chu-han missed the qualifier for the semi-finals in women’s kayak, finishing 26th in the first heat and 25th in the second. First through 24th place qualify for tomorrow’s semi-final.

In women’s single sculls at the Sea Forest Waterway, Huang Yi-ting finished sixth in 8:34.51. She is set to compete in the semi-finals on Friday.

Kao Chan-hung failed to finish in the men’s 61kg class for weightlifting, where he was among the final nine competitors at the Tokyo International Forum.

Kao hauled 125kg in a clean opening snatch, but failed his two subsequent attempts. He also failed both of his initial 147kg clean and jerks.

Eighteen-year-old Ting Hua-tien failed to qualify for the apparatus final in women’s gymnastics, placing 49th on the uneven bars with a score of 12.233 and 41st on the balance beam with 12.566.

Only the top eight on each apparatus qualify for finals.

Ting, also known as the “gymnast genie,” has the distinction of having a floor element named after her by the International Gymnastics Federation. At the 2019 World Cup in Melbourne, she performed what is now known as “The Ting.”

Meanwhile, Taiwan’s Olympic gymnastics coach Lin Yu-hsin said he would resign after the men’s team failed to reach the quarter-finals on Saturday.

“I feel very sorry for you, but what’s more important is that I hope everyone will continue training in a respectful, tolerant and friendly manner so gymnastics in Taiwan can move forward,” Lin Yu-hsin wrote on Facebook.

The men’s team finished 10th with a score of 246.263 and was eliminated from the competition.

Lin Yu-hsin said he hopes everyone would cheer for Lee during the pommel horse competition.

Taiwan’s Kao Chan-hung reacts as he competes in the men’s 61kg weightlifting competition during the Tokyo 2020 Olympic Games at the Tokyo International Forum yesterday. Photo: AFP