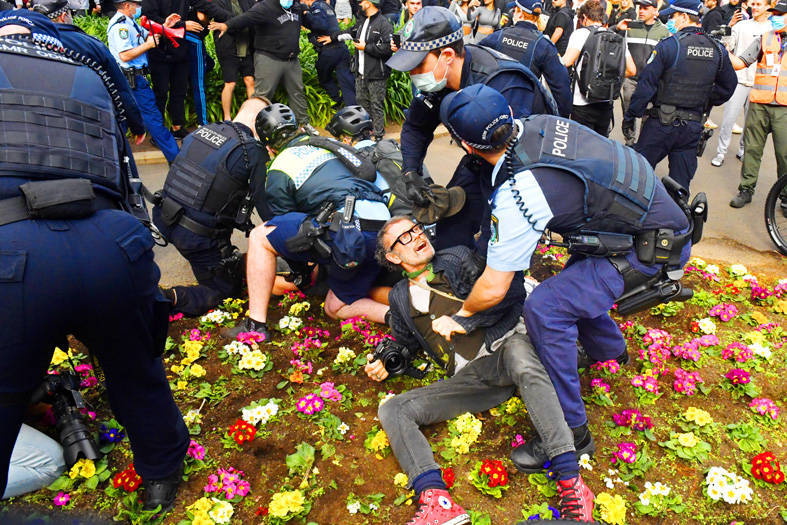 In Sydney, dozens of protesters were arrested after an unauthorized march flouted public health orders, while several confrontations with police broke out during the hours-long rally.

Officers were pelted with potted plants and bottles of water as opponents of Sydney’s month-long stay-at-home order took to the streets in numbers.

Thousands also crowded several streets in Melbourne after gathering outside the state parliament in the early afternoon.

The protesters, who mostly were not wearing masks, were flouting rules on non-essential travel and public gatherings, a day after authorities suggested the restrictions could remain in place until October.

The state of New South Wales reported 163 new infections, bringing its total in the current outbreak to nearly 2,000.

“I am utterly disgusted by the illegal protesters in the city today whose selfish actions have compromised the safety of all of us,” New South Wales Premier Gladys Berejiklian said in a statement.

Hundreds of police responded to the Sydney protest, with several demonstrators pulled from the crowd in handcuffs by officers. Police said they issued nearly 100 fines and arrested 57 people.

Vietnamese authorities on Friday reported more than 7,000 new infections across the nation on Friday — the third record number of daily infections in a week.

The center of the normally bustling capital was empty and shops were shuttered yesterday as the lockdown came into force.

“I think people in Hanoi as myself agree with the city’s sudden decision of locking down the city,” resident Nguyen Van Chien said.

“We have to take economic risks to fight the pandemic,” he added.

About one-third of Vietnam’s 100 million people are already subject to lockdown orders.

Meanwhile, everyone in a county in China’s southwest near Myanmar is to be tested for COVID-19 following a spike in infections, the government announced yesterday.

Businesses, schools and markets in Jiangcheng County in Yunnan Province are to close tomorrow and on Tuesday while nucleic acid testing is carried out, the government said. Travel into and out of the county would be prohibited.

Yunnan has reported a spike in infections traced to nearby Myanmar, where a military government that seized power in February is struggling to contain a surge in cases. Beijing has tightened border controls.

The Yunnan health agency reported five new infections yesterday, all in people it said had recently lived in Myanmar.

That increased Yunnan’s confirmed cases to 297, including 218 believed to have been infected abroad.