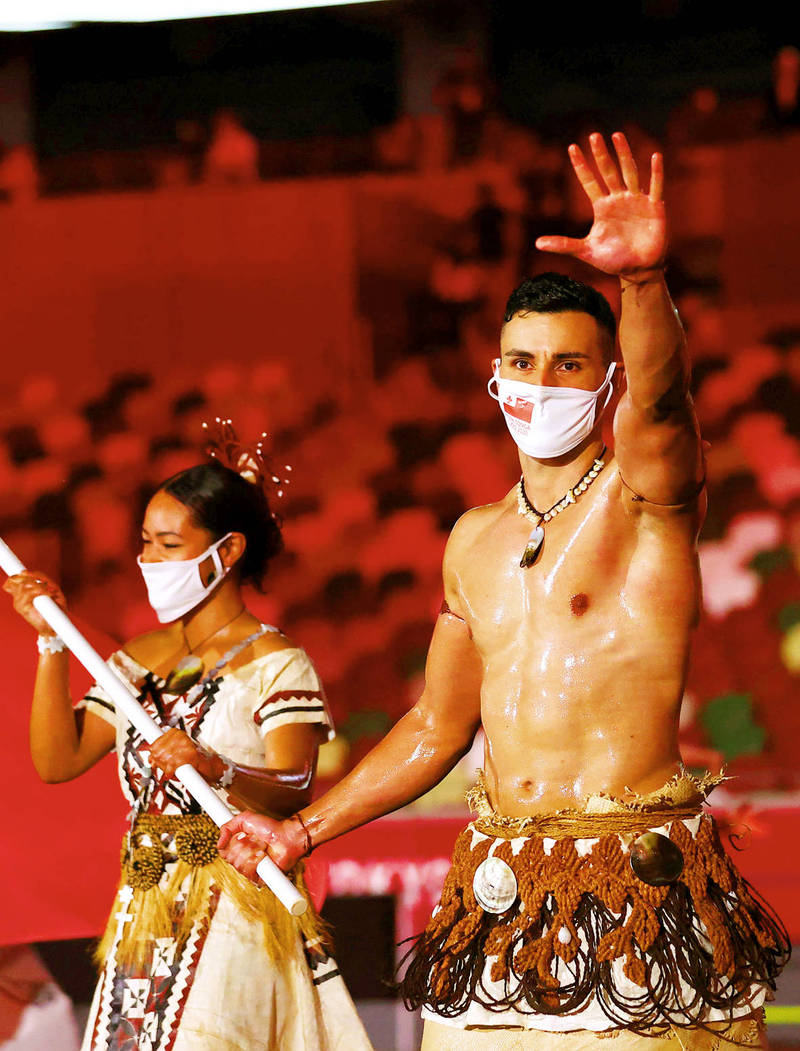 Tonga flag bearer Pita Taufatofua leads their contingent during the athletes’ parade at the opening ceremony of the Tokyo Olympics on Friday. Photo: Reuters

Tonga’s Pita Taufatofua was feeling the love yesterday after oiling up to cause an online sensation at a third straight Olympic opening ceremony, but this time he was challenged by an equally ripped rower from Vanuatu.

He racked up 45 million Twitter mentions within hours, then went on to repeat his chest-bearing feats at the curtainraiser for the 2018 Pyeongchang Winter Games, despite freezing conditions.

The 37-year-old, competing in taekwondo in Tokyo, again proved a popular online focal point at the stripped-back ceremony to open the Games on Friday, acting as Tonga’s flagbearer with fellow martial artist Malia Paseka.

However, this time there was a fly in the ointment in the form of Vanuatu rower Riilio Rii, a 27-year-old Games debutant who also showed off his glistening torso while wearing a traditional multi-coloured grass skirt.

The head-to-head inevitably led to a series of “who wore it better?” debates online, with the official Olympic Twitter account weighing in.

“It if ain’t broke don’t fix it,” the Games feed posted alongside a picture of Taufatofua, following up by saying: “Pita, we see you and we raise you” after Rii’s appearance.

Both athletes had their supporters, with specialist publication Rowing Voice declaring Rii “won the night... looking regal to his toes.”

Taufatofua appeared unfazed by the competition as he posted a message to supporters yesterday.

“Thanks all for the tags and love,” he wrote. “Not sure if going viral during a pandemic is a good thing but I appreciate all the messages and support.”

Brisbane-based Taufatofua qualified for taekwondo in Rio, then cross-country skiing in Pyeongchang, hoping to compete in kayaking in Tokyo to become the first athlete to contest three different Games in three different sports.

The kayak bid failed, but he told reporters before the Games that he was bringing his paddle to Japan just in case an opening emerged after the taekwondo was finished.

“If there’s a spare lane there and an old rubber duckie for me to get on and paddle, I’ll be on it,” he said.

He also revealed he was mulling offers from filmmakers and hoped to see his underdog story portrayed on the big screen.

Vanautu flag bearer Riilio Rii leads his team during the opening ceremony of the Tokyo Olympics at the Olympic Stadium on Friday. Photo: AFP

《TAIPEI TIMES》 Alternative sought after US …