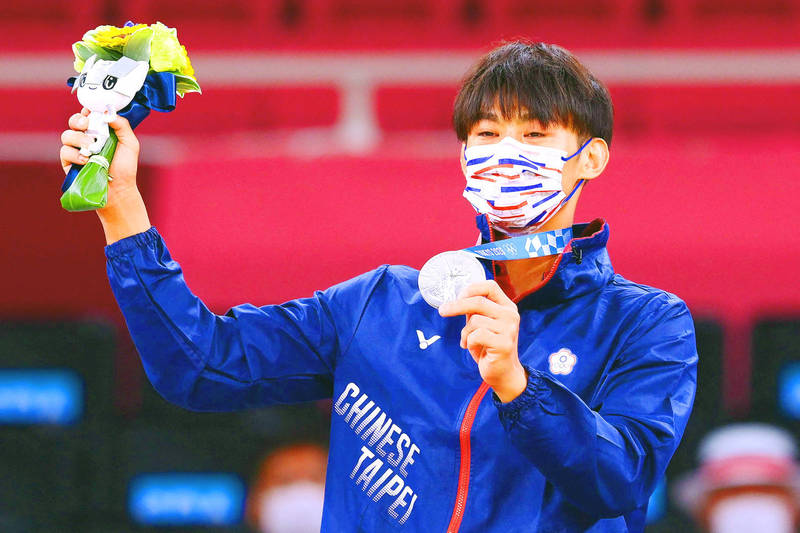 TWO AND TWO: Lin Chen-hao of Taiwan finished seventh in the women’s U-48kg category, winning two bouts before losses the quarter-finals and a repechage match

Yang’s second-place finish is Taiwan’s first medal in Tokyo and the nation’s first-ever medal in an Olympics judo competition.

Kosovo’s Distria Krasniqi beat Japan’s Funa Tonaki in the women’s under-48kg final less than an hour before Takato made sure that his team would not have a double heartbreak on the opening day of competition in its beloved homegrown martial art.

Takato won his final three bouts in sudden-death golden score, but he took the final a bit anticlimactically after Yang committed too many fouls.

Yang advanced to the final through wins in the round of 16 against Yanislav Gerchev of Bulgaria, a quarter-final victory over Tornike Tsjakadoea of the Netherlands and a semi-final triumph against France’s Luka Mkheidze.

In the women’s under-48kg elimination round of 32, Taiwan’s Lin Chen-hao defeated Francesca Milani of Italy.

She eliminated Russia’s Irina Dolgova in the round of 16, but fell in the quarter-finals against Distria Krasniqi of Kosovo and to Shira Rishony of Israel in the repechage to finish in a share of seventh.

Algerian Fethi Nourine is to be sent home from the Games after he withdrew from the competition to avoid potentially facing an Israeli opponent.

Nourine and his coach, Amar Benikhlef, told Algerian media they were withdrawing to avoid a possible second-round matchup against Israel’s Tohar Butbul in the men’s under-73kg division tomorrow.

Nourine was drawn to face Sudan’s Mohamed Abdalrasool in the opening round, with the winner to face Butbul, the fifth seed.

The International Judo Federation’s executive committee has temporarily suspended Nourine and Benikhlef, who are likely to face sanctions beyond the Olympics.

The International Judo Federation （IJF） said that Nourine’s position was in total opposition its philosophy.

“The IJF has a strict non-

discrimination policy, promoting solidarity as a key principle, reinforced by the values of judo,” it said.

《TAIPEI TIMES》 Majority would go to war for…