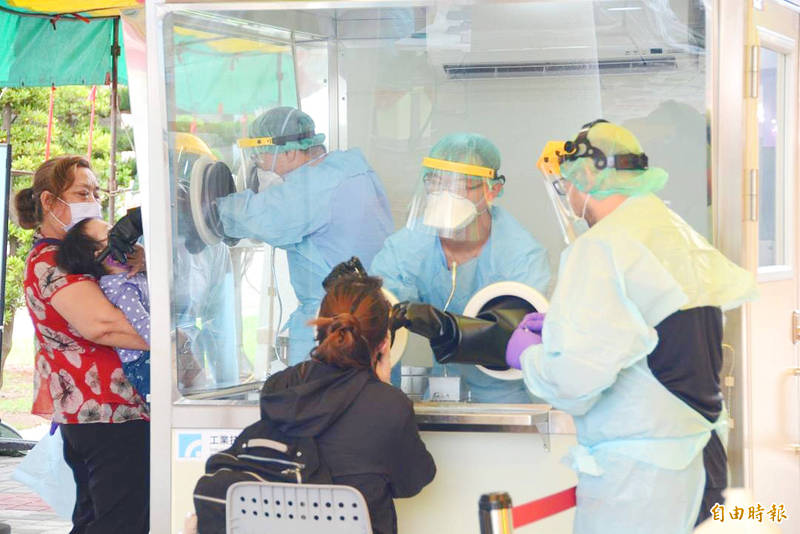 STAY VIGILANT: Although a level 2 alert would raise the limit on indoor gatherings to 50, people should still wear masks and practice social distancing, the center said

A nationwide COVID-19 alert is to be lowered from level 3 to 2 on Tuesday, but strict border controls would remain, the government said yesterday.

Minister of Health and Welfare Chen Shih-chung （陳時中）, who heads the Central Epidemic Command Center （CECC）, told a news conference in Taipei that over the next two weeks, people should still wear masks at all times outdoors, except while eating or drinking, and practice social distancing.

Funerals and wedding banquets can be held with the same crowd limits, but newlyweds at banquets should not make tableside toasts, he said.

Art and science museums must have visitors register before arriving and cannot allow groups of more than 49 people, Chen said.

Artists and crew at performance halls can remove their masks while performing, as long as they submit a negative virus test result obtained three to seven days before the performance, Chen said.

Audience members must be seated at least 3m from the stage, while individual spectators should be properly separated, he added.

Places that remain closed under the level 2 alert include community colleges, swimming pools and leisure businesses, such as dance halls, nightclubs, KTVs, gaming halls and mahjong parlors, he said.

Asked if companies should still ask employees to work from home, Chen said it is not mandatory, but expressed the hope that the practice would be maintained.

While the CECC on Monday last week allowed restaurants to offer dine-in services, most local governments did not follow suit.

Asked about dine-in restrictions, Chen said that the CECC’s guidelines are only for reference.

The Taipei and New Taipei City governments yesterday said they would maintain a ban on dine-in services, only allowing restaurants to provide takeout services.

Although it might adjust measures for foreign visitors who have received two doses of a COVID-19 vaccine, such a plan has not yet been finalized, he said.

The new measures are subject to change, Chen said, adding that people should still remain vigilant amid the pandemic.

A sign with the text: “The rest area is temporarily closed during the pandemic prevention period” is pictured at a Family Mart store in Taipei yesteday. Photo: CNA