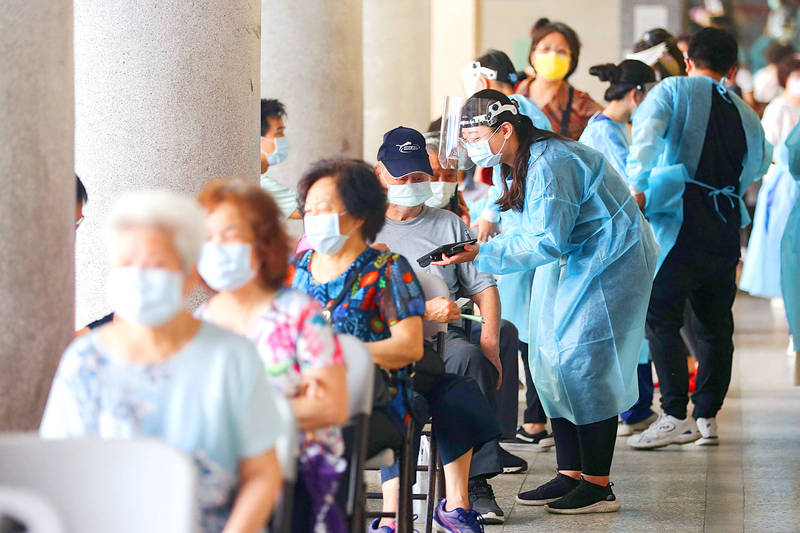 CAUSE OF DEATH: So far, autopsies have shown that most deaths were related to chronic health conditions, while one was caused by asphyxia, the center said

Thirty-four more people have died after receiving the AstraZeneca COVID-19 vaccine, the Central Epidemic Command Center （CECC） said yesterday, adding that none of the autopsies performed so far have connected post-vaccination deaths to the shots.

The deaths recorded on Wednesday were 16 women and 18 men who died one to eight days after being vaccinated, Centers for Disease Control Deputy Director-General Chuang Jen-hsiang （莊人祥）, who is the CECC’s spokesman, told a daily news briefing in Taipei.

The youngest among them, a man aged 52, had been in a nursing home and had a history of hypertension, colon cancer and epilepsy, Chuang said, adding that he was also on long-term dialysis.

He received a vaccine at the nursing home in the middle of this month and was admitted to a hospital two days later after experiencing a fever and shortness of breath, Chuang said.

The man spent three days in an intensive care unit, but his condition worsened as a result of pneumonia combined with respiratory failure and septic shock, Chuang said.

He died five days after receiving the vaccination, Chuang said.

It appeared that the pneumonia led to his death, Chuang said, adding that the CECC would further look into the matter if an autopsy is performed.

Ten more autopsies on people who died after receiving COVID-19 vaccinations have been performed, bringing the total completed to 26, Chuang said.

Twenty-three of them showed the cause of death to be related to chronic health conditions, one was the result of asphyxia after choking on food and two were due to cervical fractures, he said.

Based on the autopsy results, none of the deaths appeared to have been caused by the vaccines, he added.

As of yesterday, 178 people — 87 women and 91 men — have died after receiving a dose of the AstraZeneca vaccine, CECC data showed.

They died up to eight days after inoculation, it added.

The nation’s COVID-19 vaccine coverage was 7.43 percent, said Minister of Health and Welfare Chen Shih-chung （陳時中）, who heads the center.

The center last week advised people who have chronic diseases or feel unwell to hold off on receiving their shots until their conditions are stable.

It also advised older people to receive their vaccinations at facilities near their homes to avoid long journeys, adding that they should also avoid seeking inoculation in hot weather.