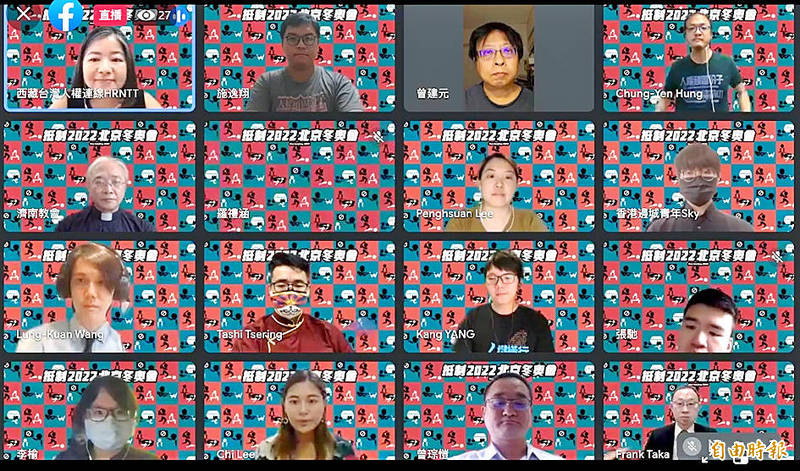 PULLOUT: Allowing Beijing to host the Winter Olympics next year would give it a platform to spread its totalitarian and repressive ideas, human rights advocates said

Condemning China’s repression of human rights in Tibet, Xinjiang and Hong Kong, a coalition of 16 advocacy groups yesterday called for a boycott of the 2022 Beijing Winter Olympics.

The non-governmental organizations urged the Legislative Yuan to join 11 Western nations and parliaments, and pass a resolution calling on the government to withdraw from the Beijing Games.

The International Olympic Committee should seek another venue other than Beijing for the Games, while the public should boycott any brands that sponsor the event, they said.

China’s behavior toward Taiwan and ethnic minorities shows that it does not care to be a good neighbor or to abide by the rule of law, Taiwan Association for Human Rights secretary-general Shih Yi-hsiang （施逸翔） told a virtual news conference.

Allowing China to host the Games on the centennial of the Chinese Communist Party’s founding would embolden Chinese President Xi Jinping （習近平）, as the Munich Games did with Hitler, New School for Democracy chairman Tseng Chien-yuan （曾建元） said.

China’s tyrannical elimination of general elections in Hong Kong has made it impossible for the territory’s residents to feel pride in Chinese athletes’ participation in the Games, he said.

“Having athletes compete peacefully inside a venue while the most unsportsmanlike enslavement of an entire society is being played outside would be the ultimate irony,” he said.

China has instituted a surveillance system to transform the Xinjiang region into a prison without walls for an entire population, Taiwan East Turkestan Association president He Chao-tung （何朝棟） said.

Taiwan should stand up to China’s saber-rattling, and the International Olympic Committee should support human rights and the people and countries being oppressed by Beijing, He said.

Beijing should not be allowed to host the Winter Olympics while it commits genocide and abuses human rights, she added.

The world does not wish to see the Olympics become a platform for another fascist regime to spread totalitarianism, Taiwan United Nations Alliance spokesman Tseng Tsung-kai （曾琮愷） said.

“Appeasing China now means allowing the destruction of the pathway to democracy for the world,” he said.

Beijing has mandated that clergy are to preach core socialist values from the pulpit as part of its program to promote Christianity with Chinese characteristics, Che-lam Presbyterian Church pastor Huang Chun-sheng （黃春生） said.

The Presbyterian Church in Taiwan thereby requests the government to bar officials from attending the Beijing Winter Olympics, per the recommendation of the US Commission on International Religious Freedom, he said.